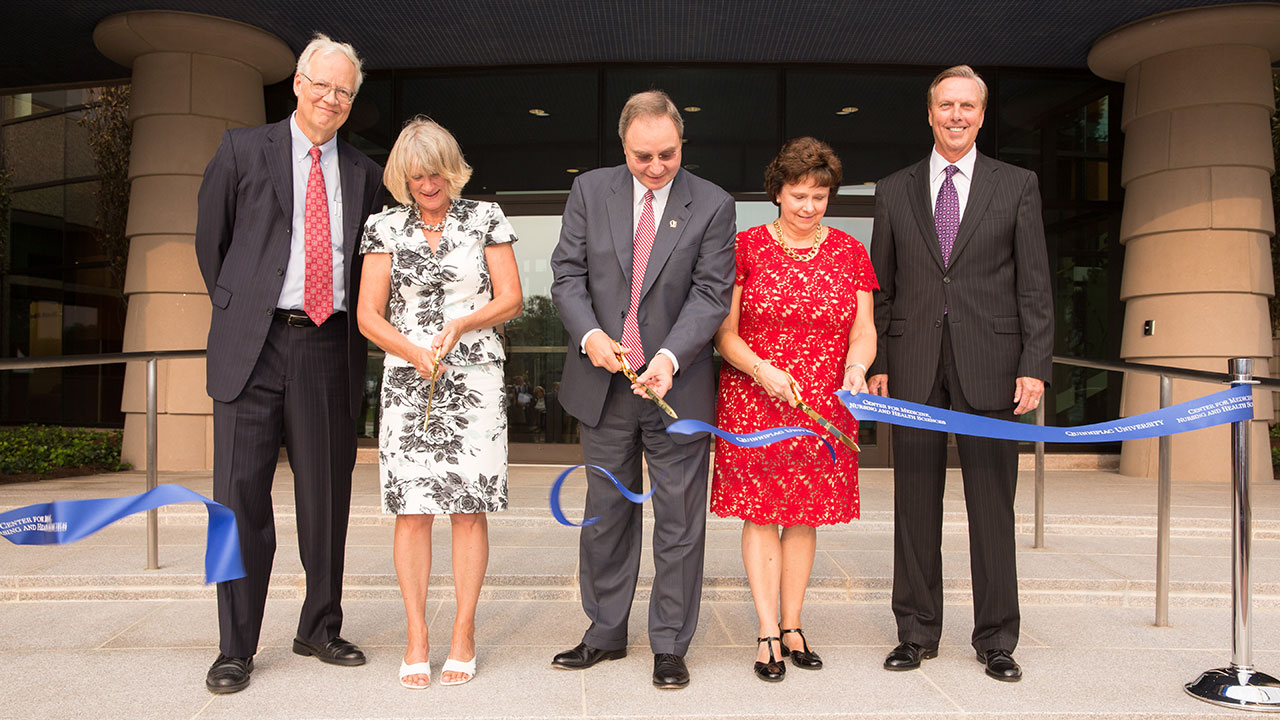 Quinnipiac University ushered in a new era Thursday, Sept. 12 with a ribbon cutting ceremony for the Center for Medicine, Nursing and Health Sciences and the dedication of the Frank H. Netter MD School of Medicine on the university’s North Haven Campus.

Lahey thanked the Board of Trustees, university administrators, faculty and staff as well as North Haven town officials and the center’s architects and construction workers for helping to make the building a place to prepare an entire team of health professionals. He also acknowledged state Rep. David Yaccarino, state Sen. Len Fasano and Senate Majority Leader Martin Looney.

“It’s a pleasure for me to welcome all of you here today for what is, without question, one of the most exciting and indeed historic days in the history of Quinnipiac University,” Lahey said. “A great many people have contributed to helping make this day a reality.”

The ceremony included the dedication of the Frank H. Netter MD School of Medicine inside the St. Vincent’s Medical Center Auditorium, which was named in honor of the school’s principal clinical partner. Netter was a noted surgeon and the world’s most prolific medical illustrator. A major gift from Barbara and the late Edward Netter of Greenwich, Frank Netter’s first cousin, pays tribute to “Medicine’s Michelangelo” in the naming of the School of Medicine.

“I can assure you that in the months and weeks ahead this medical school, the Frank Netter School of Medicine, is developed so it is a source of pride and worthy of the distinguished career of Dr. Frank Netter and equally worthy of the friendship, leadership and generosity of Barbara and Edward Netter,” Lahey said.

Quinnipiac unveiled portraits of Frank H. Netter and Edward and Barbara Netter done by artist Everett Raymond Kinstler, who attended the ceremony and was the portrait artist for six U.S. presidents. Edward (posthumously) and Barbara then received honorary degrees.

“Part of Ed wanted to become a doctor, but he became a businessman instead,” Barbara Netter explained. “Ed, who himself had enormous passion for his undertakings, admired Frank’s exemplary application of himself and all he contributed to this world. He wanted this gift to be a living reminder of all that Frank contributed to the medical field and to be recognized with this newly-formed medical school at Quinnipiac University.”

The evening concluded with tours, dinner, words from U.S. Sen. Richard Blumenthal and a keynote address from David Satcher, director of the Satcher Health Leadership Institute and a former U.S. Surgeon General.

“First and foremost, I want to congratulate the university for this very bold move at a time in history where medical education is so important,” Satcher said. “We have some major challenges ahead and we’re going to need more physicians, especially primary care providers.”