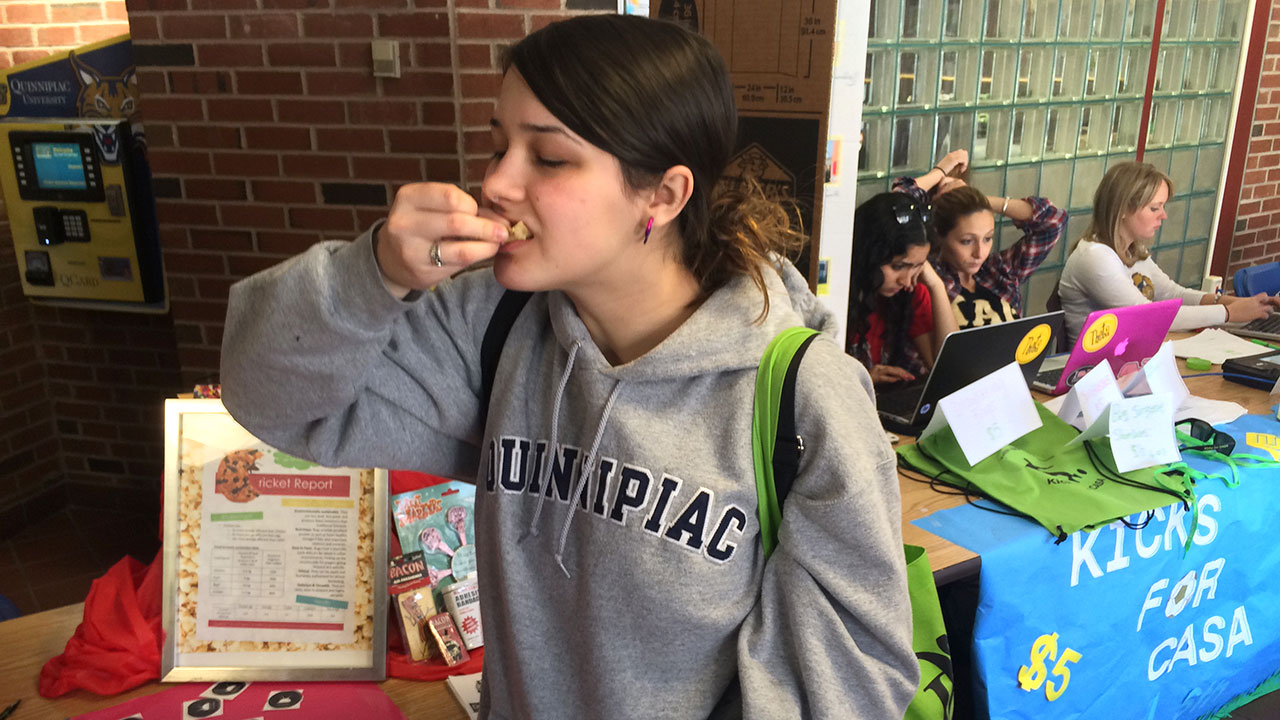 Christina Ast bit a chocolate chip cookie in half and washed it down with a gulp of vanilla latte.

Ast was just one of many brave members of the Quinnipiac University community to chomp cookies and scarf down salsa made with crickets April 1 at the Carl Hansen Student Center on the Mount Carmel Campus.

This was no April Fools’ joke. Julia Giblin’s anthropology students spent the lunchtime rush period trying to convince fellow Bobcats that eating food made with crickets is not only good for them, but also a sustainable solution for the environment.

“Eating insects is certainly not a new idea,” said Giblin, assistant professor of anthropology, who teaches the class, ‘Ancient Food For Thought.’ “It’s done cross-culturally. We want college students to think about their food choices and to try new things that are sustainable.”

A group of student chefs, including senior Eric Arndt, made the Chocolate Chirpy Cookies and Crunchy Cricket Salsa. The main ingredient came from a cricket farm in Louisiana. Arndt, a political science major from Woodbury, is also a line cook at a restaurant. He said the 500 crickets were frozen, roasted and prepped for consumption.

“For the cookies, we mashed them up a little bit so that they fit a little better and you didn’t see a big cricket sticking out,” said Arndt, who freely chirped about the recipes. “For the salsa, we just put sour cream and salsa and mixed in whole crickets and some crushed up crickets. We put cheese on top of it, threw it in the oven and voilà – cricket salsa.”

Arndt did most of his cooking at his apartment.

“It gave off an interesting smell, but any other food gives off a smell as well,” he said.

The anthropology group set up a table in the student center hallway, encouraging those who walked by to challenge food taboos and give the gourmet Gryllus the old college try.

“You can barely taste the crickets, but they do give you that extra protein that you may need for the day,” promised Paige Zacharakis, a senior legal studies major from Sharon, Mass. “Insects can be food. It’s going to be a big part of our future.”

Senior Tom Nassr, an entrepreneurship and philosophy major from Assonet, Mass., was one of the first to put his hands in the cookie jar.

“The cookie tasted normal,” he said. “I think it’s very easy to be trapped in our little Quinnipiac bubble. I think stuff like this is absolutely great for getting people to understand that there are other cultures and other perspectives and the notions of what is acceptable and what is unacceptable aren’t always true. It’s important to be open-minded.”

Madeline Guman, a freshman physician assistant major from Trumbull, went back for a scoop of seconds.

“It was actually one of the best salsas I’ve ever had,” she said.

Results from a survey of those who sampled the food will be part of a report for the TEDx Talks on Sunday, April 27 from 11 a.m. to 2 p.m. in the Clarice L. Buckman Theater at Quinnipiac. TED is a nonprofit foundation devoted to spreading ideas, usually in the form of short, powerful talks.

“We went the comfort-food route this time,” Giblin said.