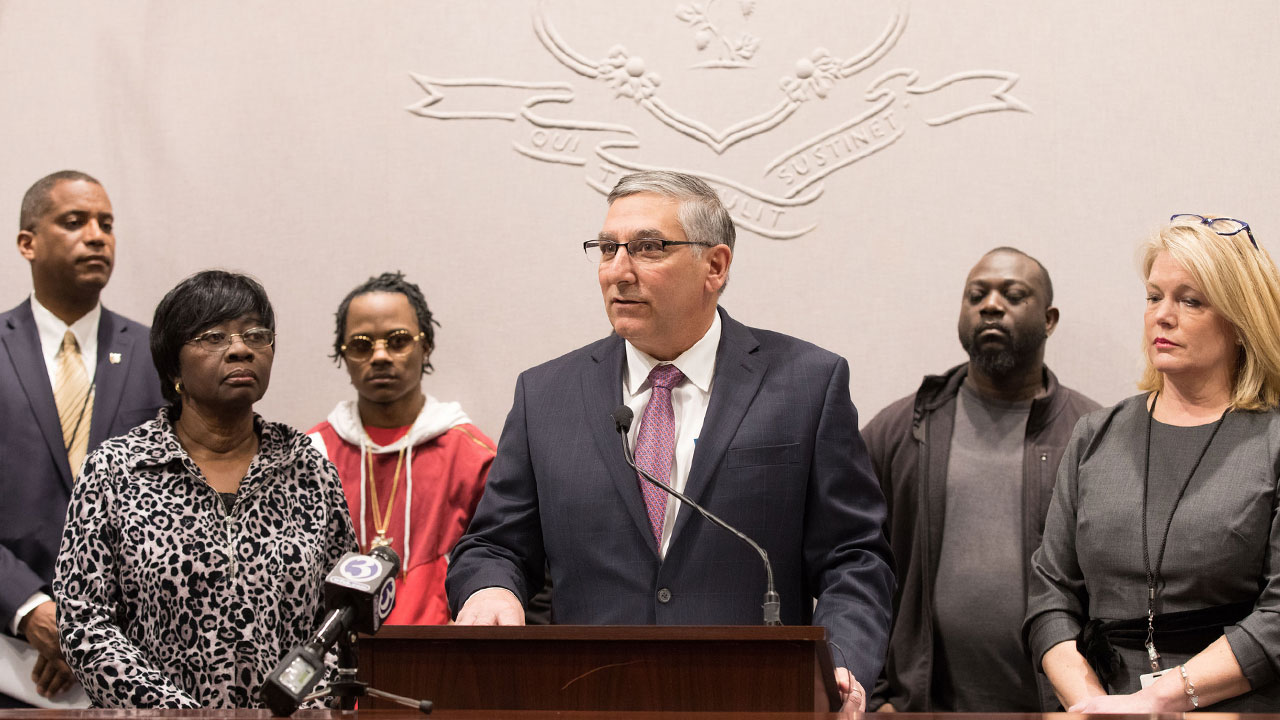 In recent months, a pattern of cases has come to light in which inmates in the state’s correction department were reportedly not provided proper medical care. Systemic failures were documented by the State Auditors in a 2017 report and multiple cases have also been reported in the press in which medical neglect of prison inmates has allegedly led to serious injury and death.

Joined by Carrie World, the mother of inmate Wayne World, whose deadly skin cancer allegedly went undiagnosed by CMHC for years, the lawmakers renewed their requests for a report from the DOC so that the legislature can join DOC in conducting a complete review of the state’s inmate medical health care system, which has been managed by UConn Health for the past 17 years under a no bid contract that has cost approximately $80 – $100 million annually.

“The gross negligence of UConn Health’s correctional health care unit is inexcusable,” said Sen. Fasano. “We have seen only a glimpse into the extent of these alleged failures. We as a legislature now have a responsibility to explore this issue further. We are seeking answers; and to get those we need transparency from the Department of Correction and UConn Health in regard to inmate medical care. We need access to any and all reports that may have been completed over the last year investigating these horrendous cases that appear to amount to nothing short of torture and abuse. I have a great deal of respect for Commissioner Semple at the DOC and I believe he is working to correct the issues he has been made aware of. But I also believe the legislature should have a role in investigating what is happening and determining best steps to improve the system in the future.”

The lawmakers pointed to Mr. World’s case as one example of the reported cases involving potential medical neglect. Despite having an aggressive rash that led to open wounds, Mr. World has said he was repeatedly denied requests for a biopsy by CMHC over a three year period. While the rash began in 2012, Mr. World was not taken to the hospital until late 2015 after he was found to be bleeding through his medical gauze and only then was he diagnosed with cutaneous t-cell lymphoma, a fatal skin cancer.

Republican lawmakers have long sought to eliminate the no-bid contract for UConn Health and replace it with a request for proposals (RFP) process to ensure quality of care while also reducing costs.

“For years, the state wrongly awarded this no-bid contract as a subsidy for UConn Health,” said Sen. Somers. “With zero effective oversight and unsuccessful self-policing, the organization’s failures have allegedly caused great harm to individuals. The legislature is now obligated to step in and speak up for those who have suffered from these inhumane conditions. We need to know the full story so we can determine the best course to prevent this torturous neglect from ever happening again.”

“Evidenced by the report released last year by the state auditors, UConn Health’s Correctional Managed Health Care unit operated with substandard quality controls and their self-policing failed to bring the truth to light for many years,” said Sen. Logan. “Taxpayers have been paying for an expensive contract subsidizing UConn Health which may have failed to provide the basic standard of care and decency that every human being has a right to receive. The reported inhumane treatment of people cannot be swept under the rug. It needs a full hearing so that we can understand how our state failed to provide basic medical attention.”

Sen. Fasano, Sen. Somers and Sen. Logan are calling for a public hearing to bring transparency to the state’s correctional health care unit and begin an open process involving the legislature to seek solutions. They are also asking that the Department of Correction provide the legislature with a report that was completed by the DOC and an outside prison consultant that investigated 25 cases including eight deaths related to the correctional health care unit.