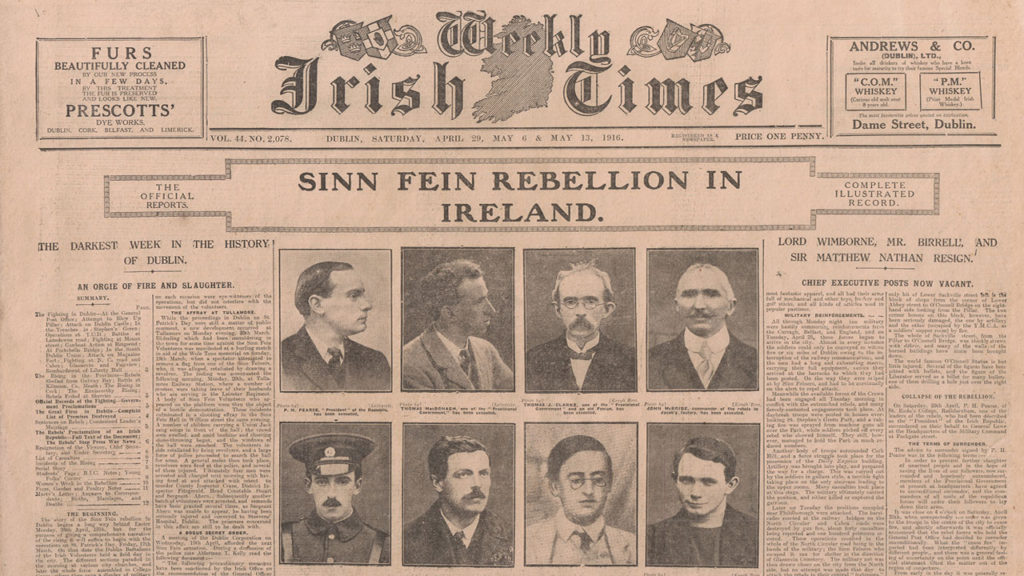 Ireland’s Great Hunger Institute at Quinnipiac University has digitized the first issue of “The Weekly Irish Times” to be published in Dublin immediately following the Easter Rising.

The first issue is featured in the institute’s exhibit, “The Seed of the People: 1916 Remembered,” which runs from March 23-Sept. 30 in the Lender Family Special Collection Room, located in the Arnold Bernhard Library, on the Mount Carmel Campus.

Christine Kinealy, director of the institute, worked with Mary Glynn, information analytics manager at Quinnipiac, to make all 12 pages of the newspaper available for viewing and research at http://www.quinnipiac.edu/IGHICollection.

“Newspapers provide a fascinating window into the past,” Kinealy said. “This edition is particularly poignant as it brings the first news of the men executed for taking part in the Rising. We are delighted to make it freely available to anybody interested in learning more about the Rising and its immediate aftermath.”

The year 2016 marks the 100th anniversary of the Easter Rising in Ireland, a rebellion that changed the course of modern Ireland and led to its independence. The exhibit honors one of the most pivotal years in Irish history, when a small group of men and women in Dublin rebelled against the British Empire.

The exhibit also features both a full Proclamation of the Irish Republic, which is being loaned to the institute by Jim Callery of Strokestown House in County Roscommon, Ireland, and a rare half copy of the Proclamation, considered to be one of the most important documents in Irish history, which is on loan from Todd Allen of New Jersey.

Exhibit hours are Monday through Saturday from 9 a.m. to 5 p.m. and Sundays from noon to 5 p.m.

In addition to “The Seed of the People: 1916 Remembered,” Quinnipiac will screen the documentary film, “1916: Irish Rebellion,” on Sept. 29 from 4-7 p.m. in the Mount Carmel Auditorium in the Center for Communications and Engineering. A panel discussion will follow with faculty from Quinnipiac and the University of Notre Dame.

All events are open to the public. For more information about institute events, call 203-582-7809.

Ireland’s Great Hunger Institute at Quinnipiac University is a scholarly resource that uses lectures, conferences, courses and publications, to provide a deeper understanding of the causes and consequences of the Irish Famine, also known as An Gorta Mór. The Institute also fosters an appreciation for Irish culture and history.