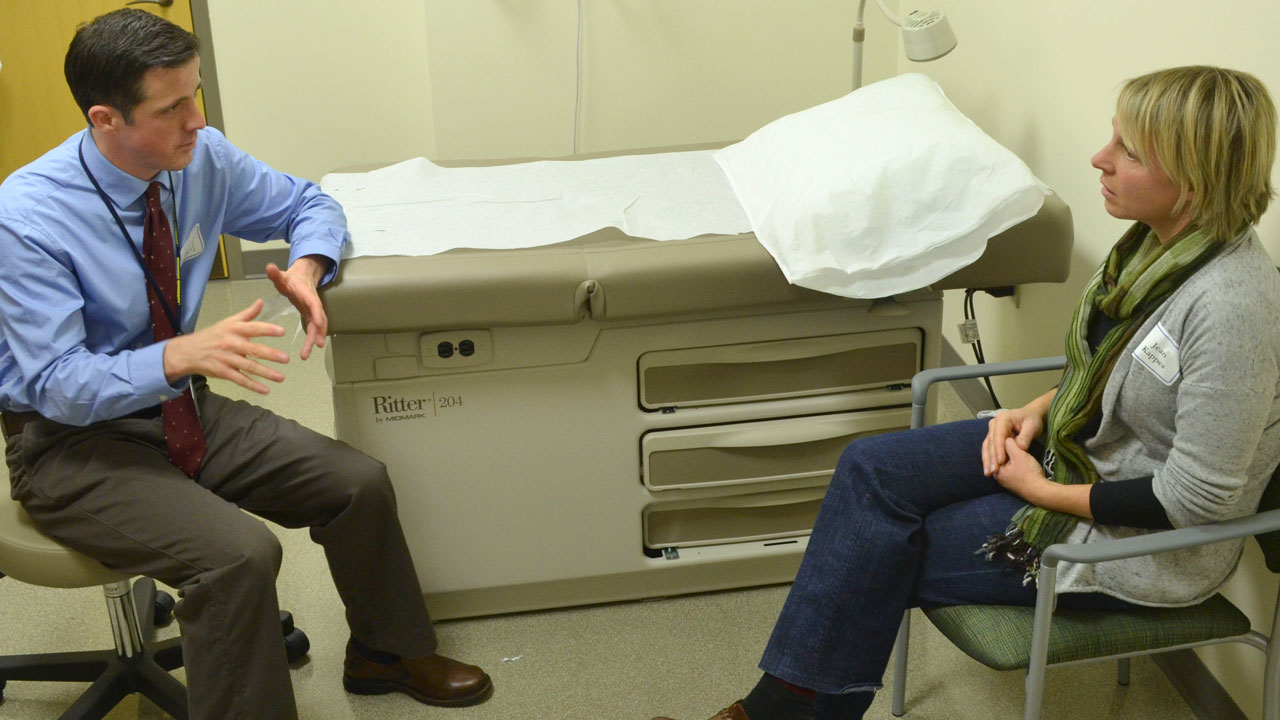 [box]Dr. Aaron Bernard, of North Haven, left, clinical skills director at the Frank H. Netter MD School of Medicine at Quinnipiac University, chatted with Jean Kappes, one of the 24 state residents who have been hired to be Quinnipiac’s first standardized patients who will work with medical, nursing and health sciences students.[/box]

Ailing from a serious case of bronchitis, Cheshire’s Joellen Putnam scheduled a visit with Dr. Anthony Ardolino at the Frank H. Netter MD School of Medicine. She answered a series of questions about her personal health and family medical history, but stumbled when Ardolino asked if she is a smoker.

Putnam, who initially denied using cigarettes, admitted she smokes about half a pack a day.

“That was the only time you deviated from the script,” Ardolino said in praising Putnam.

Putnam wasn’t really a smoker or a patient suffering from a chest cold; she just plays one in her part-time job. She is one of 24 Connecticut residents hired to be Quinnipiac’s  first standardized patients.

The standardized patients are in the process of learning what a typical medical interview and physical examination entails. They will eventually evaluate medical students for their ability to ask the correct questions and perform physical examination maneuvers correctly.

The group, comprised of men and women ranging in age from 22-80, will play a key role in the education of the medical students. On Dec. 12, the simulated patients met with seven members of the medical school faculty to discuss “ailments” including bronchitis, unstable angina and migraine headaches.

“We tell the medical students, ‘This is your flight simulator,'” said Ardolino, executive dean in the School of Medicine. “This is where they get to crash and burn because they’re not really taking care of people. They can try new things, fail miserably and just come back and do it again without harming the patient. Your involvement in their education is very important.”

Dr. Aaron Bernard, clinical skills director at the School of Medicine, said the standardized patients were hired in mid-November. He said many are retired, while about 10 members of the group have television, movie and Broadway acting experience. One even appeared on “Saturday Night Live.”

They have all been given scripts to study and some freedom to improvise.

“They don’t have to be actors,” Bernard said. “In cases where a patient is emotional, frustrated, angry or depressed a theatrical background will help, but the average encounter with a doctor isn’t a big, emotional event. I think our group has a lot of variety.”

Still, Bernard likened the Dec. 12 sessions to a dress rehearsal. Hamden’s Elaine Foran and New Haven’s Tony Franco and Sandra Gibson have all been hired as standardized patients. Foran and Franco are both retired educators, while Gibson worked in information technology at Yale.

Franco, the former principal at Betsy Ross Arts Magnet School in New Haven, portrayed a patient suffering from unstable angina. He met with several members of the medical school faculty, who asked him questions and critiqued his acting skills.

“I think it’s wonderful,” Franco said. “It’s an opportunity to help a medical student become more well-rounded and be more familiar with dealing with people. I was in education all my life. I was looking for something to do where I could help others.”

“I’m confident that the students who graduate form Quinnipiac are going to be exceptional in their clinical skills, their bedside manner and their communication,” Bernard said.