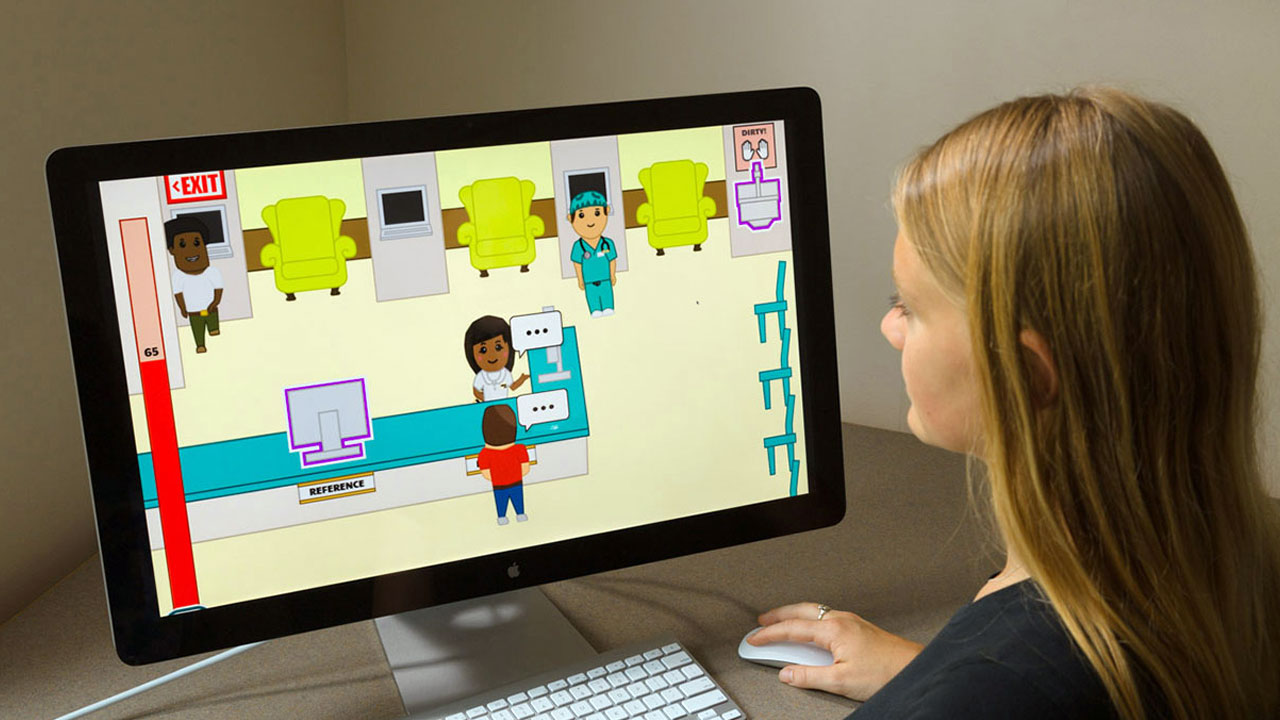 It’s a hectic day at the hospital and Rush is the only nurse on duty.

A 38-year-old patient named Tony Kent sits in the waiting area. He fell off a ladder trimming his hedges and is in terrible pain. Rush notes that Kent’s breathing is slow and labored.

Rush escorts Kent to the back and requests an arterial blood gas (ABG) test from the lab.

Just then, 36-year-old Barry Allen walks up to the receptionist. He says he’s feeling anxious and is having difficulty catching his breath. Rush leaves Kent to greet his new patient. Allen is hyperventilating. He complains he feels dizzy and has a tingling sensation in his arms.

Meanwhile, Kent grows visibly frustrated. He grimaces and his face takes on the hue of a ripe tomato. Rush, too busy with Allen in the waiting room, hasn’t checked the results of Kent’s ABG test. Eventually, Kent can’t take the wait any longer and gets up out of his seat and disappears.

ABG Rush, a video game that aims to teach nursing students ABG analysis, is the product of a year-long collaboration between Quinnipiac University’s School of Nursing and the game design and development program.

“It’s a time management game,” said Jonah Warren, assistant professor of game design and development. “The player has to juggle multiple tasks simultaneously. We looked at a number of games for inspiration, including Diner Dash, a game where the player controls a waitress serving customers. In our game, the player has to help an endless stream of patients by reading their history, checking signs and symptoms, making an initial assessment, requesting blood work, and finally, giving a diagnosis.”

The university received a $10,000 Innovation in Accelerated Nursing Education grant from the Robert Wood Johnson Foundation, New Careers in Nursing Scholarship program, to fund the project. In addition to Warren, the project coordinators includedCory Ann Boyd, associate professor of nursing and director of the accelerated RN to BSN degree programs, and Mary Ann Glendon, associate professor of nursing at Southern Connecticut State University.

An ABG test measures the acidity (pH) and levels of oxygen and carbon dioxide in the blood. Results then can be used to diagnose respiratory and metabolic issues seen in patients with diseases such as asthma, cystic fibrosis and chronic obstructive pulmonary disease (COPD), or liver failure and kidney disease.

Boyd said students have trouble piecing together patient symptoms and their corresponding ABG test values. That’s where the video game comes in handy.

“We want to cement the association between what the numbers mean and the symptoms,” she said. “The game is a quick, easy learning tool. Students can play it for 10 to 15 minutes and keep coming back to it. In the School of Nursing our students complete some very complex simulation scenarios on their computers—that has merit, but so does this quick infusion of information.”

“As students we’re buried in so many books and there’s so much to read,” he said. “When my brain is tired and my eyes are blurry from reading, I can go to the game to keep my mind active, and it gives me a refresher on the subject matter.”

Game design and development students Ron Burgess and Ryan Schwarz spent their senior year programming and developing the game from a card game prototype to the final web-based open source version. Colin Winders, a junior in the GDD program, created the graphics and illustrations.

“Making educational games is something I hope to do more of in the future,” said Burgess. “It’s very interesting and challenging to make this kind of material fun.”

The team will present the project at the New Careers in Nursing annual conference in Washington, D.C., in September.