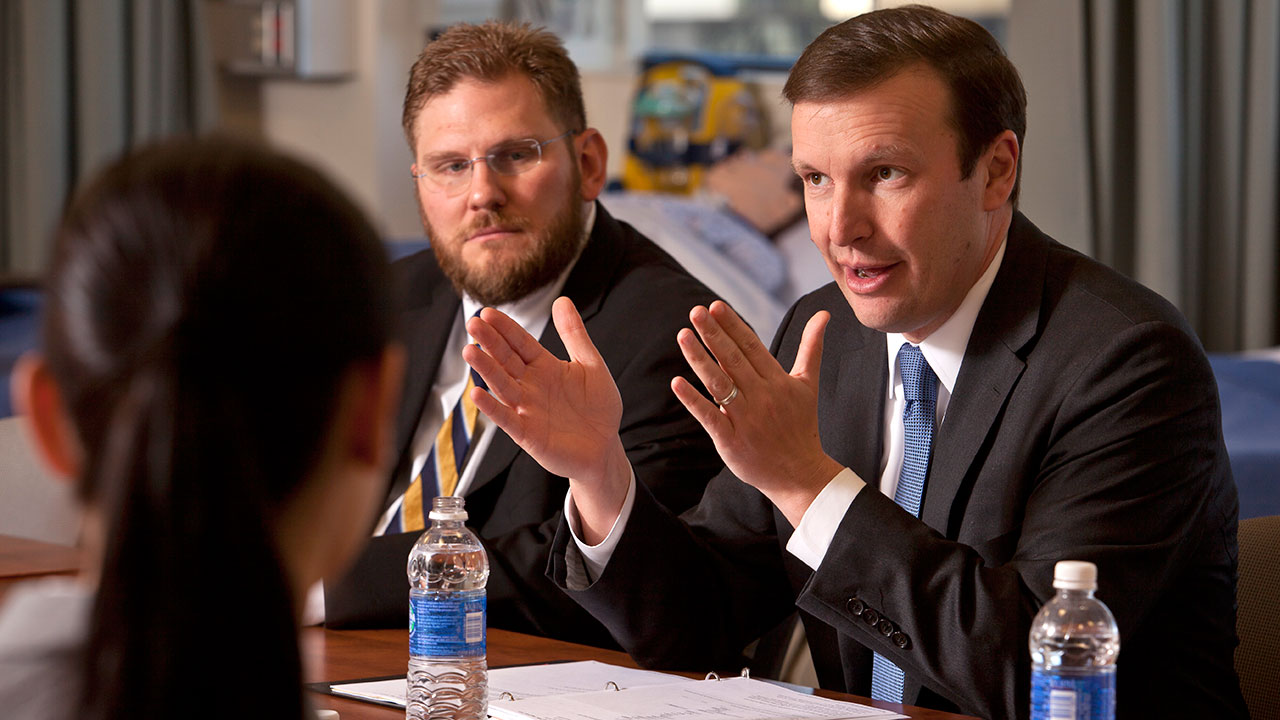 U.S. Senator Chris Murphy visited Quinnipiac University on April 1, to discuss a report that male nurses out-earn female nurses by an average of $5,000 per year.

“The numbers are pretty remarkable,” Murphy said. “This is an issue of concern for everyone.”

Flagg and Gaddis are enrolled in the accelerated nursing program, while Phelan is a junior undergraduate. Giles, Martin-Beaulieu and Simone are students in the doctor of nursing practice program.

Murphy’s visit was prompted by a recent Journal of the American Medical Association report on pay inequalities. In Connecticut, women are paid only 78 cents for every dollar paid to men, resulting in an annual income gap of $13,229 between men and women who work full-time.

“This cannot be explained by anything other than discrimination,” Murphy said.

Lange said she was not surprised by the Journal of the American Medical Association report.

Flagg said one issue is that women, “don’t want to come across as being rude,” when negotiating salary or asking for a raise. To help even the playing field, the School of Nursing teaches all its students resume-writing, job-interviewing and wage-negotiating skills.

“I have a sister, I have a wife, I have a mother, I could have a daughter,” he said. “I don’t want their work to be less valued. I’m glad you’re taking on this issue and I appreciate it.”

Murphy also discussed his support for proposed legislation including the Paycheck Fairness Act, which he said would help close the wage gap between women and men working the same jobs and prevent further workplace discrimination. He promised be at the forefront of issues involving pay disparity between males and females.

The congressman said that one of the reasons he decided to stop by Quinnipiac was because of the university’s impact on nursing, especially in Connecticut.

“When I was in the state senate, I was chairman of the Public Health Committee and we were obsessed, at that time, with the nursing shortage in the state of Connecticut,” Murphy said. “The business you are in is diagnosing an illness and treating that illnesses. We diagnosed a problem with the nursing shortage years ago and it was Quinnipiac and a handful of other places that stepped up in cooperation with the state government to fill that need.”