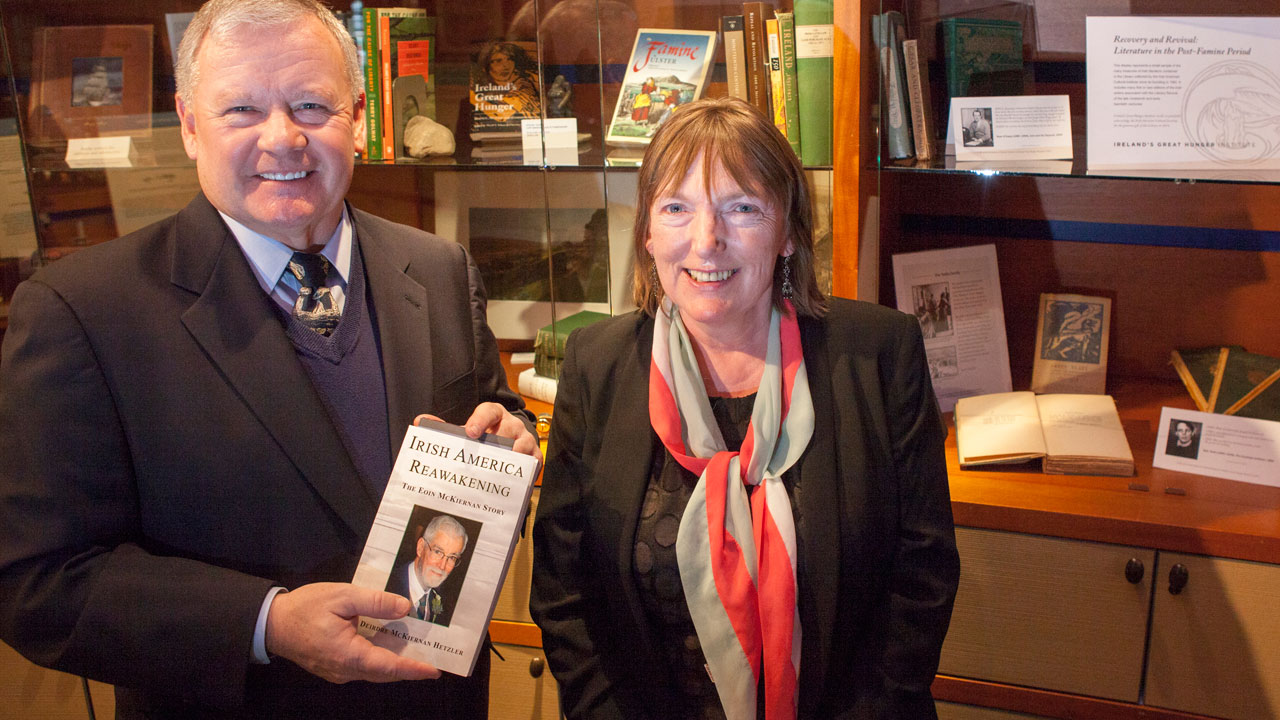 First editions and rare copies of works of many of the giants of Irish literature will now be more accessible to historians and students, thanks to the generosity of the Irish American Cultural Institute.

The library, with notable valuable editions that have been collected over 50 years, includes the works of many of the greats of Irish literature, including works by Lady Gregory, W.B. Yeats, J.M. Synge, James Joyce, George Bernard Shaw and Sean O’Casey. Also included in the collection is a Dublin newspaper, “The Weekly Irish Times,” which was published in 1916 in the immediate aftermath of the Easter Rising, which proved to be a pivotal event in the winning of Irish independence.

The library also includes a complete 50-year collection of ‘Eire-Ireland,’ the IACI published leading Irish studies academic journal, with ongoing semiannual editions that will continue to be added to the collection.

“The Irish American Cultural Institute, board members, director, chapters and members are pleased and excited to join Quinnipiac University and The Great Hunger Institute in a mission to promote and appreciate Irish history with the donation of our library,” Halas said.

Kinealy, who also is a history professor at Quinnipiac, said, “The books in the IACI library are an excellent resource for teaching and for scholarship. We are delighted that the Irish American Cultural Institute has chosen the Great Hunger Institute to act as stewards of its wonderful collection. We are working with the staff in the Arnold Bernhard Library at Quinnipiac to make the books available to students and researchers. We see this donation as the beginning of a wonderful partnership between the two institutes.”

Robert Smart, dean of the College of Arts and Sciences at Quinnipiac, said, “The addition of the IGHI collection to Ireland’s Great Hunger Institute and the Arnold Bernhard Library at Quinnipiac is a major step toward making the institute a powerful engine for student scholarship on campus. Students now have access to a wide and deep catalog of texts on Irish literature, history, culture and society—many of them original editions—which can become the portal to a rich understanding of Irish studies. The collection will also have much value for external scholars who will no doubt see these additions to our library holdings as an indication of the centrality of Quinnipiac University in the expanding field of Irish studies.”

Founded in 1962, the Irish American Cultural Institute is the leading Irish American cultural organization in the United States. It offers programs on both sides of the Atlantic that support and promote Irish and Irish-American artistic and cultural initiatives.

Located at Quinnipiac University in Hamden, Ireland’s Great Hunger Institute is a scholarly resource for promoting the study of the Great Hunger, and its causes and consequences, in North America. The Great Hunger occurred from 1845-52, when blight destroyed virtually all of Ireland’s potato crops for consecutive years. The crop destruction, coupled with British governmental indifference to the plight of the Irish, who at the time were part of the United Kingdom, resulted in the deaths of more than 1 million Irish men, women and children and the emigration of more than 2 million to nations around the world. This tragedy occurred even though exports of food and livestock from Ireland continued and, in some cases, actually increased during the years of the Great Hunger. For more information about the institute, click here.