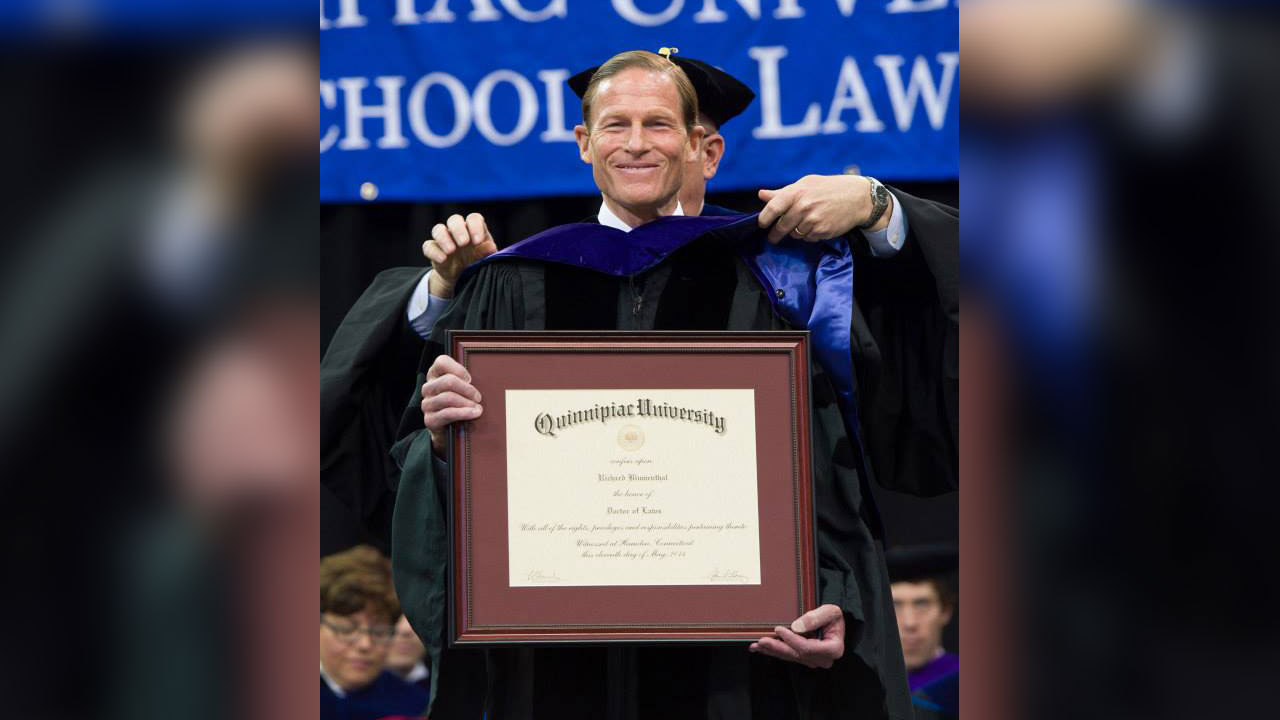 [box]U.S. Sen. Richard Blumenthal holds his honorary degree as Mark Thompson, executive vice president and provost at Quinnipiac, placed the doctoral hood over him during the commencement ceremony.[/box]

“My hope for the future is you,” Blumenthal told the 116 graduates at the TD Bank Sports Center on the University’s York Hill Campus. “We need your vision, your energy, your strength, and, yes, your impatience with what is going on in Washington — and your drive to change it.”

Democracy is not a spectator sport, said Blumenthal, who received an honorary degree from Quinnipiac during the ceremony. “If we are not engaged, our democracy suffers and we, as a nation, are weaker for it.”

The U.S. Senator encouraged students to consider devoting their lives to service to others — particularly veterans, immigrants and individuals facing inequality in marriage and salary.

“We are the freest and greatest country in the world,” Blumenthal said. “In our statutes, in our Constitution, in our local and state laws, we are the model of the world, but very often, those rights exist only on paper. They need to exist in real life. They need to be made real.”

He called on Quinnipiac’s law graduates to be champions for these causes.

“Fulfill the promise of this great country and represent causes and people other than yourself — causes bigger than yourself,” Blumenthal said. “Use the extraordinary training you received in this incredible institution to champion these important causes.”

Arunan Arulampalam, president of the Student Bar Association, told his fellow graduates that they stand at a critical junction in their lives. “I have every faith and confidence that our generation could meet today’s challenges,” he said. “Today we graduate and go forth from here in a bright new world.”

Together as a generation, no challenge is too large to overcome, he said. “From this day forward, this world belongs to you and to me,” Arulampalam said. “I hope this is a responsibility our generation takes seriously.”

Blumenthal said Quinnipiac gave the class the necessary training to overcome today’s challenges. “President John Lahey is one of the great leaders in American higher education today,” he said. “I have been very privileged to work with him over many years and I can tell you that he has helped move forward American higher education in ways that are profoundly significant and important.”

Alexander Meiklejohn, who was voted by students “Professor of the Year,” encouraged the Class of 2014 to go out and make the world a better place through the foundation that was laid at Quinnipiac.

“To me, the more important part of your achievement is that you have learned how to learn about the law and about helping people solve legal problems,” Meiklejohn said. “That part is more important both because you will use those skills constantly in your work, and because learning how to learn is much more challenging than simply learning law.”