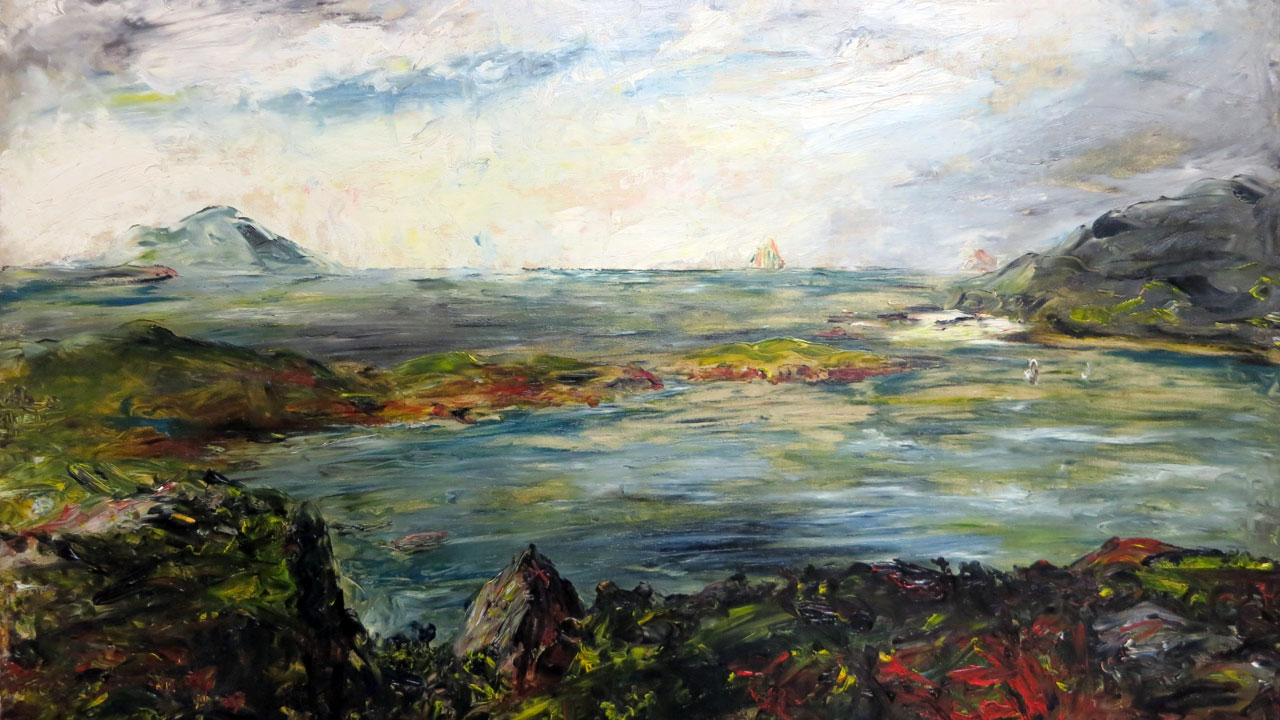 Ireland’s Great Hunger Museum at Quinnipiac University recently acquired the landscape painting “Derrynane” by Jack Butler Yeats, one of the best known Irish painters of the 20thcentury, and it is currently on view at the museum.

“We are thrilled to have Jack Yeats’ remarkable landscape “Derrynane” join the Museum’s growing collection of Irish paintings,” said Grace Brady, executive director of the museum. “It is fitting that a work of such historical significance and quiet beauty find its permanent home at Ireland’s Great Hunger Museum. We look forward to sharing it with our visitors today and for generations to come.”

Derrynane, a village in County Kerry, Ireland, located on the Iveragh peninsula, has been described as “a melancholy spectacle” located near Derrynane Abbey, the home of famous Irish Liberator Daniel O’Connell.

“Jack B. Yeats stands head and shoulders above other Irish artists of his time,” said Niamh O’Sullivan, curator. “When Yeats stood in front of his easel in 1927 to paint “Derrynane,” he knew this was no ordinary place, but a charged landscape whose associations with O’Connell were rife with contradictions.”

A constitutional politician who eschewed violence in achieving his political ends, O’Connell’s legacy lent itself to the parliamentary politics of the new Irish state, attempting to distance itself from the republican violence of the War of Independence. Yeats, however, remained a republican, ill at ease with the new post-treaty Ireland.

Though the new Irish state sought reconciliation, it also carried its own repressions. O’Connell’s great political achievement was Catholic Emancipation, yet unlike his united Irishmen predecessors, he made no effort to unite Catholics, Protestants and dissenters.

O’Sullivan said, “It is difficult not to see resonances of this exclusion in the paintings of Yeats, a Protestant republican whose brother, William Butler Yeats, eloquently and angrily felt obliged to remind the Irish Senate in 1925 that Protestants were ‘no petty people.’ Jack Yeats would have admired the heroic stature of O’Connell, however, not least his popularity among the common people as ‘King of the Beggars.’ And it was not for nothing that the Yeats family cat was called Daniel O’Connell.”

Yeats painted more than 1,100 works in oil alone. He illustrated books, newspapers and periodicals, and designed for the theater. He also wrote for both children and adults: novels, poetry and plays. O’Sullivan said Yeats easily segued from one art form to the other; “the poetic is evident in his paintings, and the visual in his writings.”

Ireland’s Great Hunger Museum at Quinnipiac University is home to the world’s largest collection of visual art, artifacts and printed materials relating to the Irish Famine. The museum preserves, builds and presents its art collection in order to stimulate reflection, inspire imagination and advance awareness of Ireland’s Great Hunger and its long aftermath on both sides of the Atlantic.