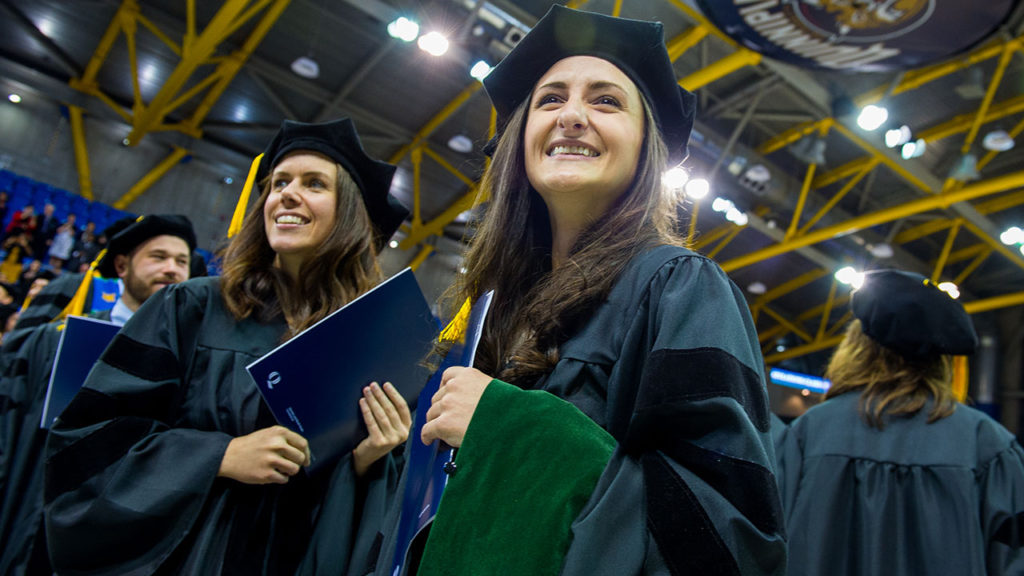 Charissa DiNobile, right, president of Quinnipiac University’s inaugural medical class, at the afternoon commencement ceremony on May 14. Fifty-eight students received medical degrees. “We came, we built and we leave Netter a better place than it was when we arrived,” she said.

Quinnipiac University conferred 150 degrees during two ceremonies held on May 14 at the TD Bank Sports Center on the York Hill Campus.

Dr. Jonathan LaPook, chief medical correspondent for CBS News, suggested that the 58 new doctors seated before him remember what it feels like to be a patient and the emotions they feel, from helplessness to embarrassment to fear, when he spoke at the afternoon commencement ceremony for the inaugural class of Quinnipiac University’s Frank H. Netter MD School of Medicine.

“I know you’ve been studying for years to learn the science of medicine, but today I’m also asking you to consider the art of healing. Don’t let all those facts and figures crowd out your ability to connect with your patients,” said LaPook, who received an honorary degree during the ceremony.

LaPook is a professor of medicine at the NYU School of Medicine and Mebane Professor of Gastroenterology at NYU Langone Medical Center. He is also executive director of NYU’s Langone Empathy Project, which seeks to promote a culture of empathy in medicine.

“What’s going to distinguish you as true healers is the way you embrace humility, compassion and empathy,” LaPook said. “Turn away from the computer screen and look people straight in the eyes. Understand the extraordinary importance of listening. And realize that even when you don’t have the answer for a patient in need you can help – with a sympathetic ear, a reassuring touch of the hand, and by sticking by them, through sickness and health.”

All 58 graduates matched to residencies around the country this past March. Graduates and their families were welcomed by Charissa DiNobile, president of the Class of 2017.

“We shared a bond together, we learned to be pioneers and we put our hearts and our heads together to form what it means to be students of this school,” DiNobile said. “We became collaborators and facilitators for change. We came, we built and we leave Netter a better place than it was when we arrived.”

Dr. Christine Van Cott, assistant professor of surgery and surgery clerkship director, delivered remarks, and P. Galen Didomizio talked of the remarkable journey he and the other members of this first graduating class have experienced. The ceremony ended with the recitation of the Hippocratic Oath.

Both LaPook and Barbara Netter were awarded honorary doctor of humane letter degrees. Through the generosity of renowned philanthropists Netter and her late husband, Edward, the Frank H. Netter MD School of Medicine was named in honor of Edward’s first cousin, the famed medical illustrator. Netter, a practicing therapist, is the co-founder and honorary chairman of the Alliance for Cancer Gene Therapy, which awards grants to scientists researching gene therapy’s potential as a cure and treatment method for cancer.

Richard A. Robinson, associate justice of the Connecticut Supreme Court, urged the 87 School of Law graduates to think about the power they will hold as they strive to balance their obligations to clients with their duties as officers of the legal system.

Robinson received an honorary doctor of laws degree May 14 at the Commencement and Doctoral Hooding ceremony in our TD Bank Sports Center. During his address, he said the legal profession is a noble one, but one that is frequently misunderstood.