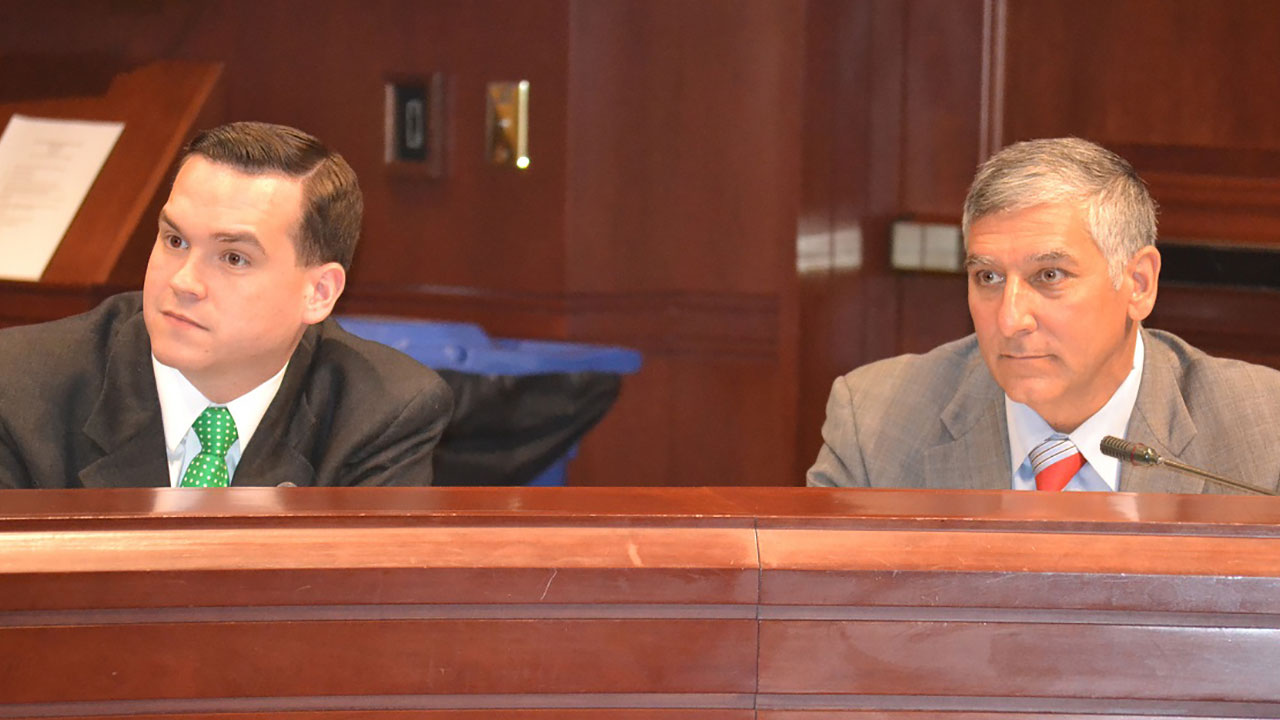 Senate Minority Leader Len Fasano, joined by Representative Chris Davis on behalf of House Republican Leader Themis Klarides, outlined the Republican “Prioritize Progress” transportation plan at the panel’s meeting in the Legislative Office Building. The Republican plan would allocate $37.4 billion in state funding over the next 30 years for transportation without implementing tolls or new taxes. Instead the plan would reprioritize current resources to fund transportation projects with General Obligation (GO) bonds.

“Improving Connecticut’s transportation systems must become a priority. We need to make our roads and bridges safe and we need to make it easier for people to get moving around our state,” said Sen. Fasano. “But we also have to live within our means. Tax increases and tolls are not necessary when the governor and the legislature can simply prioritize transportation using existing resources.”

“This is a clear path to a sustainable transportation plan for the state of Connecticut,” said Rep. Davis, who serves as the Ranking Member of the state’s Finance, Revenue and Bonding Committee. “Transportation should absolutely be a priority for us, but we need to consider the implications for the future.”

The no-tolls, no-new-taxes plan was first released earlier this year. The plan prioritizes the state’s allocation of GO bonds and places a high priority on transportation among other necessary bonding programs including local school construction, clean water grants and housing initiatives. The plan also includes funding for the state’s automatic allocation programs including UConn, CSUS and Bioscience CT.

As part of the financing plan, Republicans are proposing a cap on annual bonding to scale back and limit the excessive bonding Governor Malloy has initiated. Prior to Governor Malloy’s administration, the state allocated approximately $1.4 billion annually in GO bonds. This year, Governor Malloy has estimated allocating $2.5 billion in GO bonds. Under the Republicans’ proposed cap of $1.75 billion in the first year and a gradual decrease to $1.6 billion, core programming currently supported by bonding would be funded and all remaining funds within the cap would be dedicated to transportation.

In total the plan would allocate over $1 billion annually over the next 30 years through GO bonds and Special Tax Obligation (STO) bonds already used for transportation.

In capping bonding, the plan would limit the amount of special interest money currently available for the governor’s discretion. It would still provide the governor with a $100 million annual contingency fund to use on any project(s).

“Does that mean we have to tighten our belts and make tough decisions? No questions about it,” said Fasano at the panel meeting. “But at least we know that it’s something we can depend upon for many years to come.”

At the meeting Rep. Davis also detailed how the Republican budget proposal, “Blueprint for Prosperity,” would shore up the state’s Special Transportation Fund (STF) to further protect current funding for transportation that is expected to dwindle in coming years. Rep. Davis also emphasized bipartisan support for locking down the funds in the STF to ensure they are used for transportation projects. He expressed support for a constitutional amendment and other protection methods such as using bond trustees to oversee funds. The STF is projected to have a deficit beginning in fiscal year 2018.

While the governor’s panel is tasked with identifying ways to fund the governor’s $100 billion proposal, Fasano emphasized that part of their analysis should look at what Connecticut can afford.

Fasano highlighted that tolls would not generate nearly enough money to cover the cost of the governor’s proposal. He cited a CDM Smith study that only found approximately $12.1 billion in potential revenue from the toll options allowed in Connecticut under current federal law. Fasano and Davis both emphasized that Connecticut’s taxpayers cannot afford another tax increase.

The Republican plan also recommends re-establishing the Transportation Strategy Board disbanded by the governor. Fasano and Davis invited input from the Transportation Finance Panel regarding how to make that panel most effective in their role of prioritizing specific projects.

“We don’t think our plan is the be-all end-all,” said Fasano. “But we met with the panel today to open the conversation and show how our plan offers a strong, viable solution.”

The prioritize progress plan is attached and can be downloaded here.