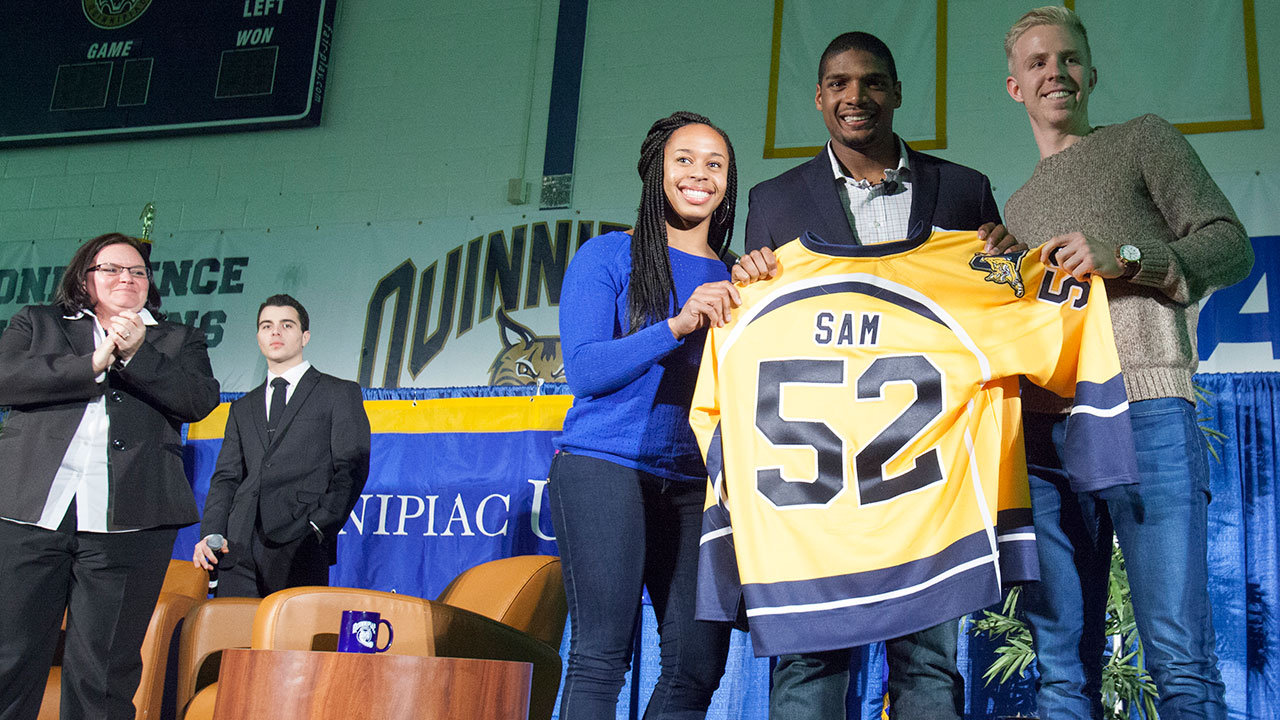 (Pictured from left) Jasmine Martin, a senior on the Quinnipiac University women’s basketball team, Michael Sam, the first openly gay player to be drafted by the NFL, and Tobias Esche, a junior on the men’s soccer team. Martin and Esche presented Sam with a Quinnipiac hockey jersey following his speech on March 3.

Michael Sam, the first openly gay player to be drafted by the NFL, spoke before about 1,900 Quinnipiac University students on March 3 at Burt Kahn Court on the Mount Carmel Campus.

Sam’s speech focused on being true to oneself, the importance of being part of a team, his journey personally and professionally over the last 12 months, and standing up to bullying.

“I am who I am,” Sam said. “You need to take the time to get to know someone before you judge them.”

Sam, 25, made history last year when the star college football player came out as gay ahead of the NFL draft, making him the first openly-gay player to be drafted in any major American sport.

Sam has become a role model for not only young gay athletes, but for anyone struggling to be accepted. He told a story about the cousin of a teammate who was gay and twice tried to commit suicide. The young woman thanked Sam for his courage and vowed to never again hurt herself.

“That really hit home for me,” Sam said. “From time-to-time, we still talk. She’s doing great. If you can save one life you have already won.”

Sam’s visit was a collaboration among Quinnipiac’s athletics, campus life, and multicultural and global education departments as well as the university’s Gay, Lesbian, and Straight Supporters (G.L.A.S.S.) student organization and the Interfraternity Council.

“Remaining true to himself, despite the adversity he has faced growing up, Michael Sam models the way for our students,” said Stefano Fasulo, associate director for campus life. “He encouraged them not to rush to judgment – never meet hate with hate. Having seen his accomplishments thus far, it is amazing considering his life experiences growing up.”

Sam had a rough upbringing in Hitchcock, Texas. He was the youngest boy among eight brothers and sisters. His childhood included the deaths of three siblings, homelessness and physical and mental abuse from family members.

“I wouldn’t be here without football,” he said. “I owe so much to the game. It saved me. I could have ended up selling drugs or be in jail, just like my brothers. I chose this sport to help me get out of my childhood. “

Sam had an exceptional football career at the University of Missouri, culminating with him being named a first-team All-American and Co-SEC Defensive Player of the Year.

He came out to his Tigers teammates prior to his senior season at the urging of then-boyfriend Vito Cammisano, who is now his fiancé. Sam was selected by the St. Louis Rams in the seventh round of the 2014 NFL Draft.

“I’m not the only one in the NFL who is gay,” he said. “I’m just the only one who is out. I have had a lot of support. I understand why they want to protect their livelihood. Hopefully, there will be a day when it wouldn’t matter. Vito told me that no one could do this but me because I’m so strong and so determined. I’ll take that responsibility. It’s who I am. After what I’ve seen and how I grew up, I’ve accomplished so much. I became the first person out of eight kids to go to college and graduate. I have achieved so much. I will continue to be a help to others.”

Sam was cut by the Rams at the end of training camp and was on the Dallas Cowboys practice squad before being waived. He will participate in the first NFL Veteran Combine later this month.

While playing in the NFL remains his dream, he said he will continue to help others no matter what happens in the future.

“Do I need football to continue? No,” he said. “I think I can help many people in other ways, such as just talking to someone who’s not feeling good or not comfortable in their own skin.”

Sam will appear on the 20th season of ABC’s “Dancing with the Stars.” His dance partner, Peta Murgatroyd, attended Sam’s speech at Quinnipiac along with an ABC cameraman.

Sam’s bravery earned him the Arthur Ashe Courage Award at the 2014 ESPY Awards. He was named one of GQ Magazine’s Men of the Year and was a finalist for Sports Illustrated’s Sportsman of the Year.

“I get so many hateful messages every day,” he said. “I think you respond to hate with love.”