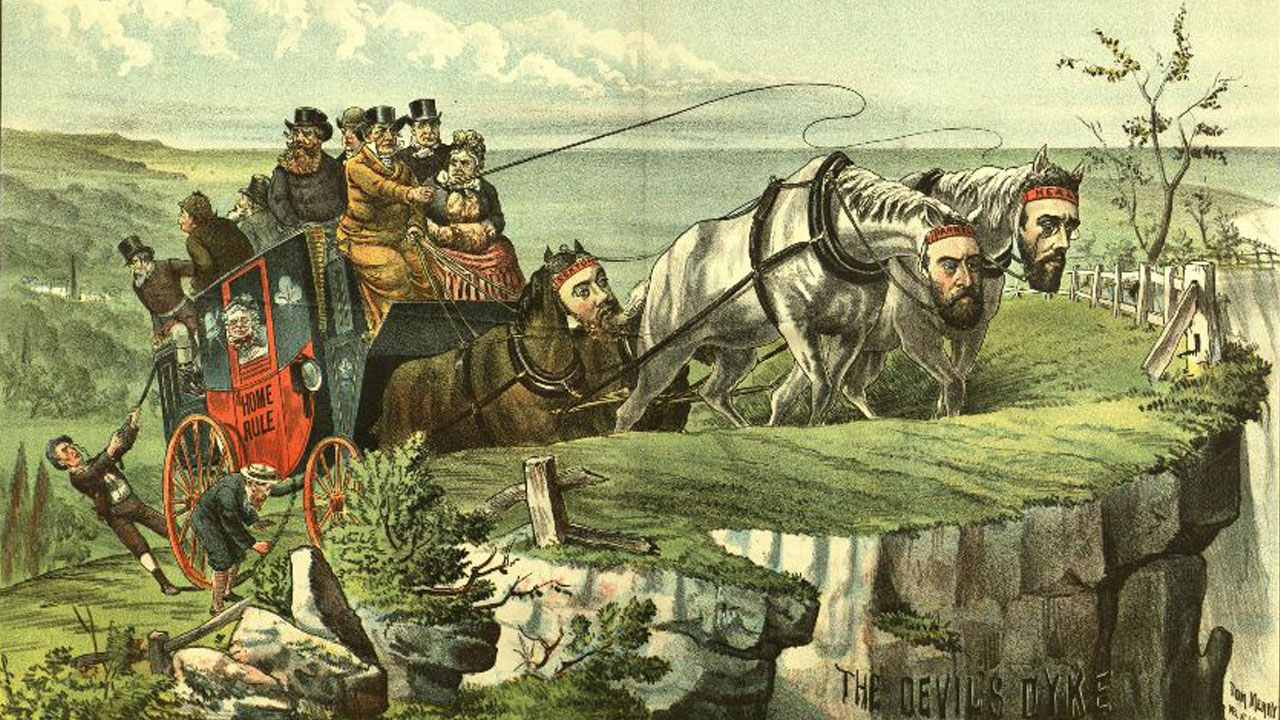 [box]This image from March 1887 appeared in The St Stephen’s Review, a weekly magazine of political comment that was published in London from 1883 to 1892. The artist, William Mecham (1853 –1902), was an English cartoonist and satirist who used the pseudonym, Tom Merry.  The image demonstrates opposition to ‘Home Rule,’ the desire for self-government by Irish nationalists, being depicted as an act that would be destructive to Ireland.[/box]

Ireland’s Great Hunger Institute at Quinnipiac University has acquired a collection of Irish political cartoons that are being held in the Lender Family Special Collection Room at the Arnold Bernhard Library.

The images were donated by Gerard Moran, a native of County Mayo in Ireland who is the author of many books on 19th-century Irish history, including the acclaimed “Sending out Ireland’s Poor” and the forthcoming “Mayo. A County History.”

There are 29 political cartoon paintings that date back to the period in Irish history known as “Home Rule” from c. 1885-1914 when Irish nationalists tried to win independence from Britain. The cartoons originally appeared in London’s St. Stephen’s Review and Dublin’s Weekly Freeman newspapers.

“For historians they are a great resource, but also for students of visual culture because they are beautiful and very powerful images,” said Professor Christine Kinealy, founding director of the Ireland’s Great Hunger Institute. “One of the missions of the institute is to promote research and these paintings are a unique resource that can be used to bring more understanding to this time period in Ireland.”

Established in September 2013, the Irish Great Hunger Institute at Quinnipiac University is a scholarly resource for the study of the Great Hunger, which ranks among the worst tragedies in human history. Between 1845 and 1852, approximately 1.5 million Irish men, women and children died of starvation or related diseases. Blight, which virtually destroyed all of Ireland’s potato crops for consecutive years, coupled with British governmental indifference to the plight of the Irish resulted in the deaths of more than 1 million Irish men, women and children and the emigration of more than 2 million to nations around the world.

The images are available to students and researchers Monday through Saturday from 9 a.m. to 5 p.m. and Sundays from noon to 5 p.m. For more information, call 203-582-8633.

The institute also plans to digitize the paintings.