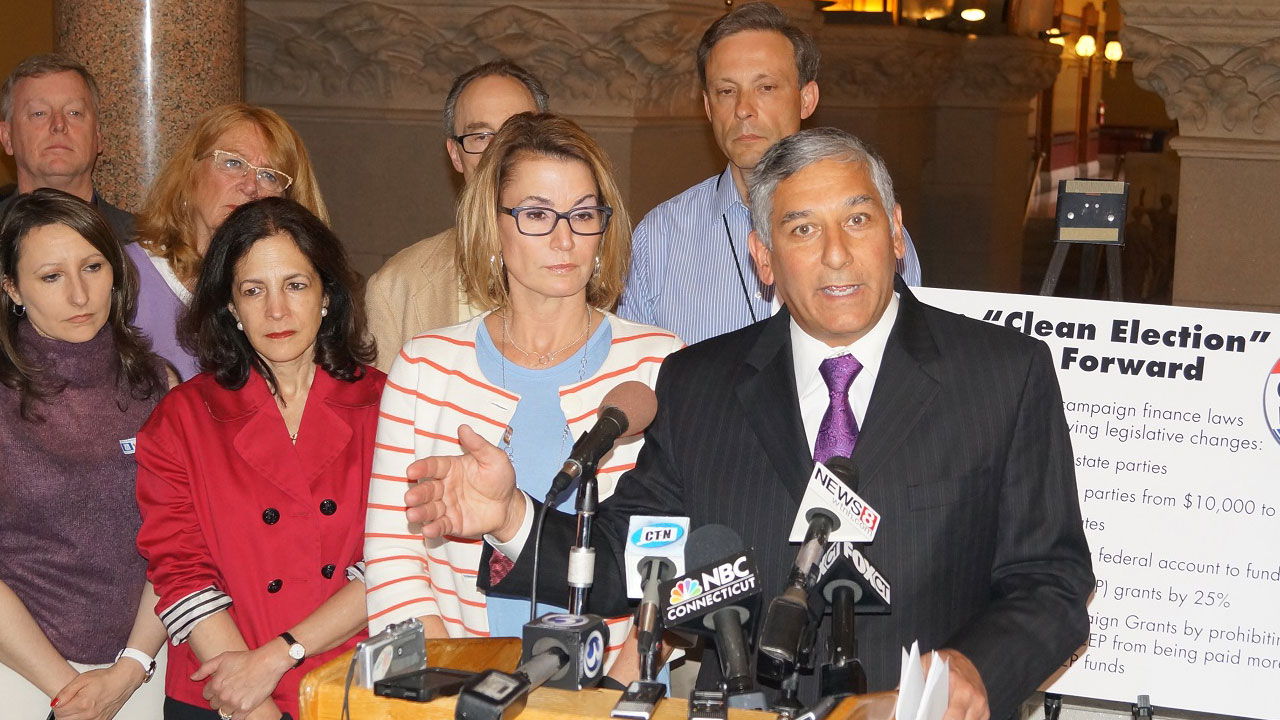 Senate Minority Leader Len Fasano (R-North Haven) stands in support of “Clean Election” reforms with fellow Republican lawmakers at the state Capitol. Members of the House and Senate joined together on Friday morning to celebrate the bipartisan passage of campaign finance reforms in the House of Representatives, and to urge the Senate to support the legislation.

Hartford – Republican legislative leaders applauded the bipartisan passage of an amended bill (Subst. House Bill No. 6749) in the House of Representatives that would implement a series of campaign finance reforms proposed by Republican legislators. The legislation rolls back changes made to the state’s Citizen’s Election Program that Republicans argue have eroded the intent of the program.

“When the Citizen’s Election Program was established, the people of Connecticut were promised clean elections in exchange for publicly financed campaigns. Sadly, we have seen the promise weaken and break over the past few years. I applaud House Republicans and Democrats for coming together on this important issue and I hope to see the same support in the Senate,” said Senate Minority Leader Len Fasano (R-North Haven).

“We now have a real opportunity to repair the damage that has been done to our campaign taxpayer-funded campaign system, and we urge the Senate to pass this legislation,’’ House Republican Leader Themis Klarides (R-Derby) said. “This was approved in overwhelming bipartisan fashion in the House. Given the recent events that have been disclosed regarding huge amounts of money sloshing throughout the system, we need to act.’’

The Republican proposal to strengthen campaign finance laws aims to clean up elections with the following legislative changes:

In 2013, individual donor limits to state parties was increased along with the amount state parties could make in organizational expenditures to a campaign. Republicans are proposing to roll back donation limits to previous levels.

Currently, candidates for state office (constitutional officers, senators, and representatives) are eligible for Citizens’ Election Program (CEP) grants even if they are unopposed.  The amount of their grant equals 30% of a full-grant. Republicans are proposing to eliminate these grants.

The State Elections Enforcement Commission (SEEC) needs to be able to enforce Connecticut’s current laws that contractors from donating to state races. Republicans are proposing legislation to help SEEC enforce this law.

By reducing CEP funds across the board, the state can save taxpayers approximately $7 million in gubernatorial election years and $2.4 million in Presidential years.

Under current law, candidates accepting CEP grants are not allowed to pay family members- this bill would expand the prohibition to prevent family members of candidates participating in CEP from being paid more than $1,000 by any candidate receiving CEP funds.

The bill now awaits a vote in the state Senate. The legislative session ends on June 3.