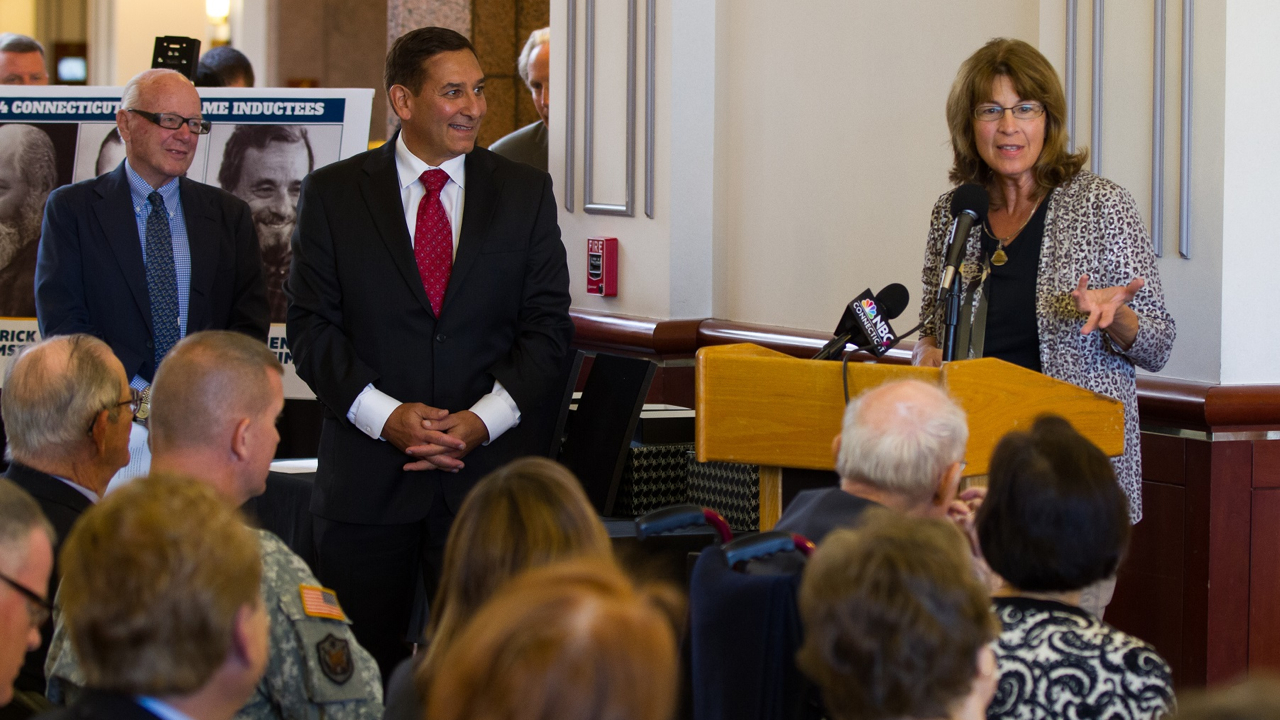 State Senators Len Fasano (R-Wallingford) and Toni Boucher (R-Wilton) honored the 2014 Connecticut Hall of Fame Inductees today at the State’s annual ceremony in Hartford. This year’s honorees include a CIA operative who was held captive in China for two decades, an African American civil rights activist, founder of Pratt and Whitney Aircraft, an American composer, a famed landscape architect and an American jazz pianist and composer, considered to be one of the foremost exponents of cool jazz – David Brubeck.

Both Senators have a local connection to Brubeck and were privileged to honor his accomplishments. Senator Fasano presented the Hall of Fame award to Catherine Brubeck Yaghsizian, Daughter of the famed jazz composer.  Yaghsizian is a resident of Wallingford.

“It is an honor to recognize a man who was a leading figure in jazz, a groundbreaking composer and pianist who became the best known ambassador of jazz to the world,” said Sen. Fasano. “Catherine has much to be proud of and we thank her for sharing her father’s legendary career with Connecticut.”

Brubeck played a key role in popularizing the first Jazz Festivals of the 1950s. Brubeck ended up playing the Newport Jazz Festival more than any other musician.

In 1958, Brubeck’s Classic Quartet was sponsored by the State Department to tour Eastern Europe and also India Turkey, Sri Lanka, Afghanistan, Pakistan, Iraq. It was the first time that jazz musicians were used as semiofficial emissaries of the United States behind the Iron Curtain.

Dave Brubeck Quartet’s best remembered piece, “Take Five”, which is in 5/4 time and has endured as a jazz classic on one of the top-selling jazz albums, Time Out and launched him into worldwide status as a jazz icon.

Senator Boucher remembers Brubeck – who was also her neighbor in Wilton before he passed away at 91 years old.

“When the Town of Wilton celebrated Dave’s 80 Birthday – there was a cake covered with 80 candles. He played the piano for 90 minutes straight. And students from the Hartford School for the Arts surprised him on stage with their performance of the “Real Ambassadors.” He received the Benjamin Franklin Award for Public Diplomacy for offering an American “vision of hope, opportunity, and freedom” through his music,” recalled Boucher. “For all of this Dave Brubeck remained a humble warm easygoing man whose ready smile and sense of humor put everyone at ease. His love of his wife, Iola – his family, his church and Wilton was keenly felt by all that knew him.”

Other Honoree’s in the 2014 Connecticut Hall of Fame include:

Located in the atrium area on the second floor of the Legislative Office Building, the Hall of Fame was designed to honor individuals from Connecticut who have distinguished them-selves in their professions both nationally, or internationally.

Not only was the Hall of Fame intended to recognize the out-standing achievements of Connecticut individuals, it was meant to serve as an educational tool for the large number of students who visit the State Capitol and Legislative Office Buildings.

Any individual or organization can make a nomination by visiting the Hall of Fame website at: http://www.cga.ct.gov/Misc/HOF/2013/nominations.ht

Funding is provided by corporate contributions and grants. Contributions are also received from individuals and foundations.