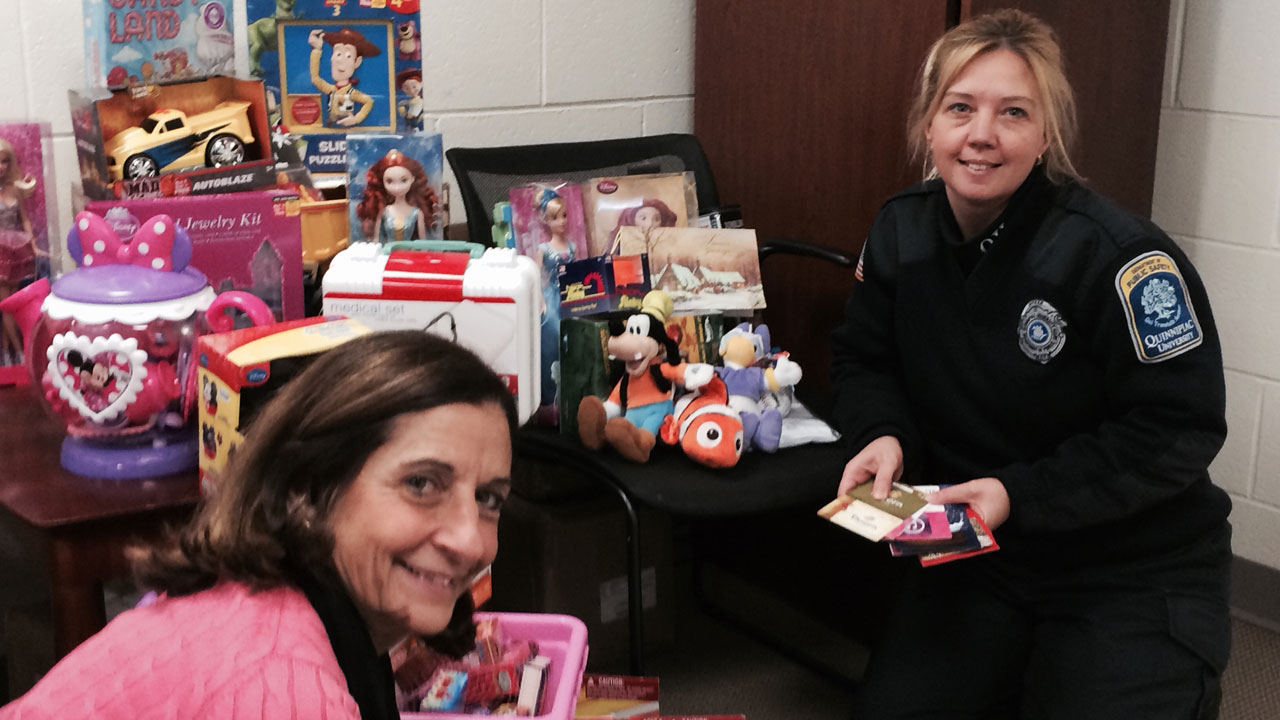 [box]Patricia Polvani (left), a secretary in the Department of Public Safety at Quinnipiac University, and Shanon Grasso, a public safety officer, have helped organize a ‘Ticket for a Toy’ drive to benefit Hamden children. Those who donate a toy, gift certificate, gift card or movie pass with a value of at least $10 will have one unpaid parking ticket expunged from their record at Quinnipiac.[/box]

Quinnipiac University’s Department of Public Safety is giving students the opportunity to pay off parking tickets with new, unwrapped toys.

The department is collaborating with Hamden Community Services, the Hamden Police Department and the Hamden Fire Department to sponsor a “Ticket for a Toy” holiday toy drive for needy Hamden children up to age 16.

”I think it shows that not every student who goes to Quinnipiac causes a problem in the town,” said Patricia Polvani, a secretary in public safety. “They also help.”

Those who donate a toy, gift certificate, gift card or movie pass with a value of at least $10 will have one unpaid parking ticket expunged from their record. Shanon Grasso, a public safety officer who helped organize “Ticket for a Toy,” said the gifts will be donated to the Hamden Community Services Department’s M.L. Keefe Community Center.

“The students have been fantastic,” Grasso said. “They feel like they are doing something nice rather than begrudgingly paying off a ticket most of them don’t think they deserve.”

About 55 toys, ranging from Barbie dolls to miniature trucks, have been collected so far, Grasso said. The most crucial need is for gifts for older children.

“There is definitely a nice variety,” Grasso added.

Not all supporters have parking violations. Rosa Nieves, a secretary in the School of Communications, donated 26 gift cards in memory of the 20 first-graders and six adults shot and killed at Sandy Hook Elementary School in Newtown, on Dec. 14, 2012.

“The tragedy happened so close to the holidays that I imagined the families who had gotten gifts for their loved ones, and that December those presents would never get unwrapped and the toys for the children would never get played with,” Nieves said. “I promised myself to do at least one thing during the holidays in memory of those precious lives lost. The best way to honor them would be to give gifts within my own community for those who need it most.”

Gifts can be dropped off at the Department of Public Safety until Dec. 6. Contributors must bring their parking ticket with their names and Quinnipiac identification numbers written on the back along with the toys.

“Whenever tragedy strikes in our communities, it can bring up anger and fear with what happened,” Nieves said. “But it can also bring out the best in us with our actions. Hopefully, that community spirit will follow through the holidays and throughout the year.”