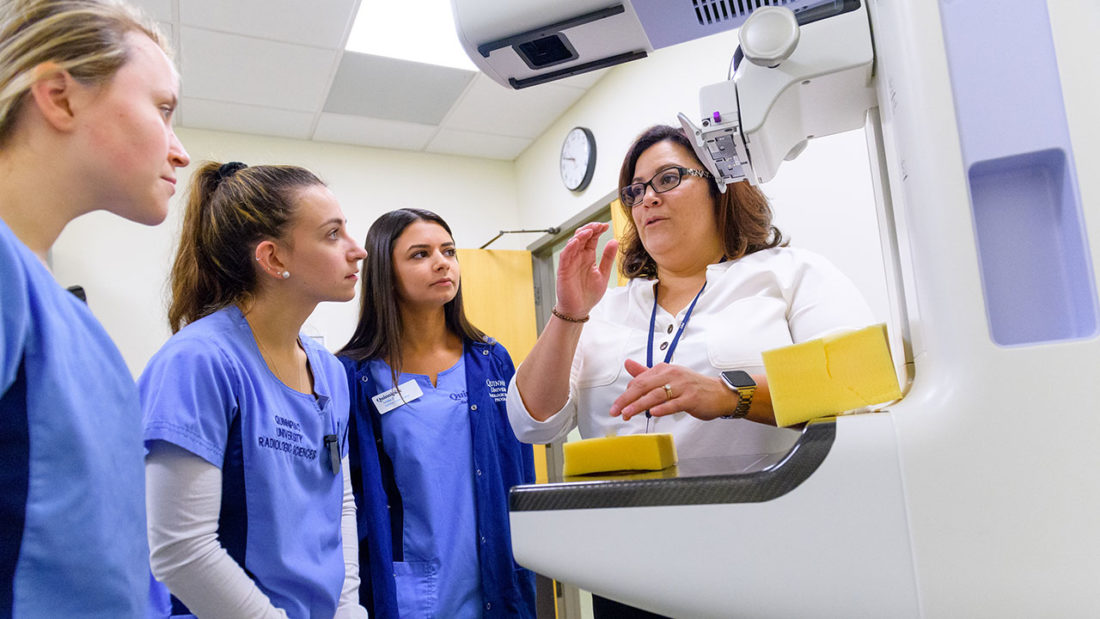 A team of Quinnipiac University professors and students returned from their holiday break early Jan. 3 to examine human skeletal remains believed to be from the first of three Revolutionary War soldiers found last month in an 18th century home being renovated in Ridgefield, Connecticut.

The three men are believed to have taken part in the first Revolutionary War battle in Connecticut in 1777 that included Brigadier General Benedict Arnold, then on the side of the Americans. The three men were later buried together and ultimately a house was built on top of the grave. The remains were discovered when the basement of the home was being renovated.

“It’s a great way to get our students involved,” explained Gerald Conlogue, professor emeritus of diagnostic imaging and co-executive director of the Bioanthropology Research Institute at Quinnipiac.

The first skeleton examined seemed to indicate a strong man about 5 feet 11 inches tall with good teeth and relatively good health, likely between the ages of 21 and 50, the team concluded.

Given Connecticut’s acidic soil, it is rare for skeletons from the 18th century to survive as well as these, Conlogue said. He attributes the home built on top of them as one of the primary reasons they survived in such a great condition.

Quinnipiac’s Jaime Ullinger, associate professor of anthropology and co-executive directors of the institute, helped give the men a voice, centuries after their passing.

“When we examine a skeleton, we are actually looking at the person’s record,” she said. “For students, this provides the opportunity to take what they are learning in the classroom and put it into practice.”

For the past two decades, Quinnipiac has utilized its imaging facilities to shine light on history, working with organizations like the Smithsonian Institute and Barnum Museum.

“Our Bioanthropology Research Institute has a long history of working with the state archaeologist on skeletons of historical and archaeological significance,” Ullinger said. “We can provide imaging technology and anthropological expertise in order to learn more information about Connecticut’s recent and ancient past. We involve our students in our research, which gives them hands-on opportunities to learn about radiography and anthropology, as well as a chance to contribute to our knowledge of human history in Connecticut.

“Our students are contributing to Connecticut historical knowledge,” Ullinger added. “What’s cooler than that?”

Tania Grgurich, clinical associate professor of diagnostic imaging at Quinnipiac, said she was grateful for the unique relationship the university has with the state archeologist and state medical examiner. She is also proud that Quinnipiac performs these services at no cost as a public service.

“This gives our students a nice opportunity to do nontraditional imaging,” she said. “The students are using their critical thinking skills not just to determine what the imaging indicates, but also how to perform the imaging in these unique situations.”

The project will continue for several months with partners across the state.