Jean Lange of Woodbridge, founding dean and professor of the Quinnipiac University School of Nursing, has been appointed to the advisory board of the Gertrude E. Skelly Charitable Foundation.

Established in 1991, the Gertrude E. Skelly Charitable Foundation provides grants to undergraduate and graduate nursing students in the United States who are faced with unexpected financial emergencies that put their education at risk. It also provides educational opportunities and medical care for those who are unable to afford them.

“It really is an honor to join the advisory board,” said Lange, who was appointed to the position by the foundation’s trustees. “I was asked to speak at their annual meeting and got a chance to know the advisory board members. It was interesting to learn about them and the foundation. I appreciate networking and how the foundation works. Making decisions about whether an application has merit is important. I hope that we can help many more students as more scholarships come out in the coming months.”

Since becoming dean in 2011, Lange has also served as a member of Quinnipiac’s Senior Leadership Team, Internationalization Task Force, Dean’s Council and President’s Planning Council. She has written articles, editorials, and book chapters, and has presented at conferences across the nation. She also has received more than $1.5 million in grants for research and other nursing projects. 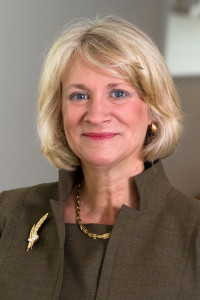 Jean Lange of Woodbridge, founding dean of the School of Nursing at Quinnipiac University.

Lange, who was inducted into the American Academy of Nursing in 2010, is a member of several organizations, including the Hartford Healthcare System Quality and Safety Committee, the New Haven Chamber of Commerce’s Governmental Affairs Committee and Health Advisory Council, the American Nurses Association, and the program subcommittee of the American Association of Colleges of Nursing.