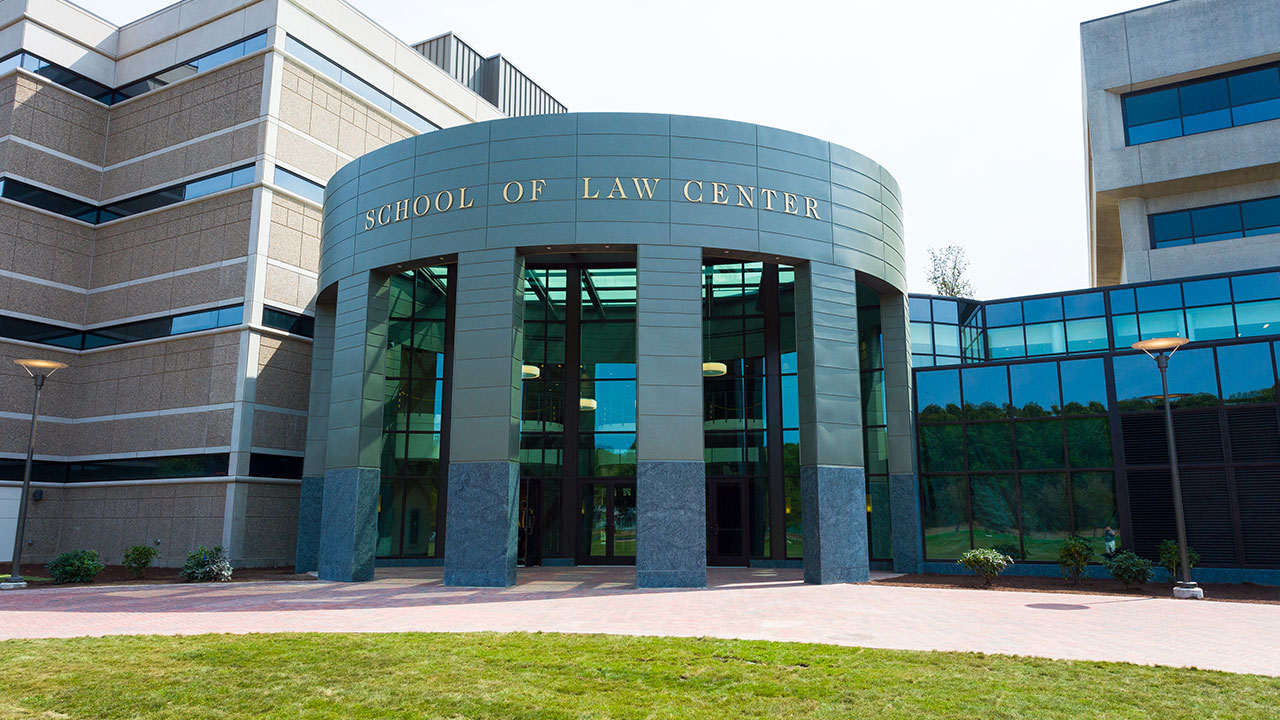 They were Catherine Blair of Wallingford, Kara Moreau of Warwick, Rhode Island, Sheldon Poole of New Haven and Caroline Watson of Hamden, all third-year law students.

“Their dedication has been consistently exceptional and has stayed at that level for years now,” said Ryan O’Neill, adjunct professor of law and one of the coaches for the Mock Trial Society. “We have seen a substantial improvement in the school’s reputation and competition teams. It keeps us moving in the right direction.”

The schools were given the case file and rules of the competition about four to five weeks before the actual competition. All of the information about the case was provided, including witness statements, pictures, diagrams and legal precedent.

The case file was based on an actual murder trial in which a man was accused of robbing and shooting a bicyclist. The state charged the suspected shooter with murder, but the defendant said he wasn’t there and blamed the shooting on someone else.

The competition was composed of two preliminary rounds, with two members from each team representing the prosecution and two others representing the defense. Blaire and Poole competed as the prosecuting attorneys, while Moreau and Watson competed as the defense attorneys. The top four teams advanced to the semifinal round on Sunday morning, and the top two teams faced off in the final round Sunday afternoon. In the final round, Quinnipiac defeated New England School of Law.

Quinnipiac went undefeated in the entire competition and won all four of its trials – the first time that has happened since 2013. The team has taken the top prize at the competition three of the last four years.

“As good as you can get,” O’Neill said of the team’s performance. “We try to make it as realistic as possible and prepare them for the real world. For them to put on the performance that they did, they are prepared.”

Members of the teams played the witnesses at trial. Sitting judges and practicing attorneys presided over all of the competition rounds, judging the competitors’ skills and providing feedback as well. The Hons. Victor A. Bolden, U.S. District Court for the District of Connecticut, Cara Eschuk, Superior Court, Danbury, and Juliette L. Crawford, Superior Court, Hartford, presided over the final round of competition.

“The fact that the Quinnipiac Law team prevailed is a testament to the students’ hard work and to the excellence of experiential learning opportunities at the law school more generally,” said Jennifer Gerarda Brown, dean of the School of Law.

In addition to winning the competition, Poole was awarded “Best Cross Examination” by the judges and attorneys.

“Sheldon Poole was excellent,” said O’Neill, who is also an associate at the Law Offices of Mark Sherman in Stamford. “His performance was one of the finest ever and it was completely professional. It was the most-mentioned moment of the trial by all of the judges.”

“I observed the final round, in which Sheldon methodically and masterfully cross-examined the criminal defendant, who was testifying in his own defense,” Brown said. “I can attest to the skill and professionalism of his work.”

O’Neill added that he and Sean McGuinness, adjunct professor of law and the other coach, prepare the students for real-life work and believe they are ready to try real court cases. He also said the students possess natural talent, which cannot be taught.

“Quinnipiac already has a very strong reputation for litigation, advocacy and dispute resolution,” Brown said. “As attorneys and judges from our region volunteer their time as judges for these competitions, they also have an opportunity to see the very high quality of the work that Quinnipiac students do.”