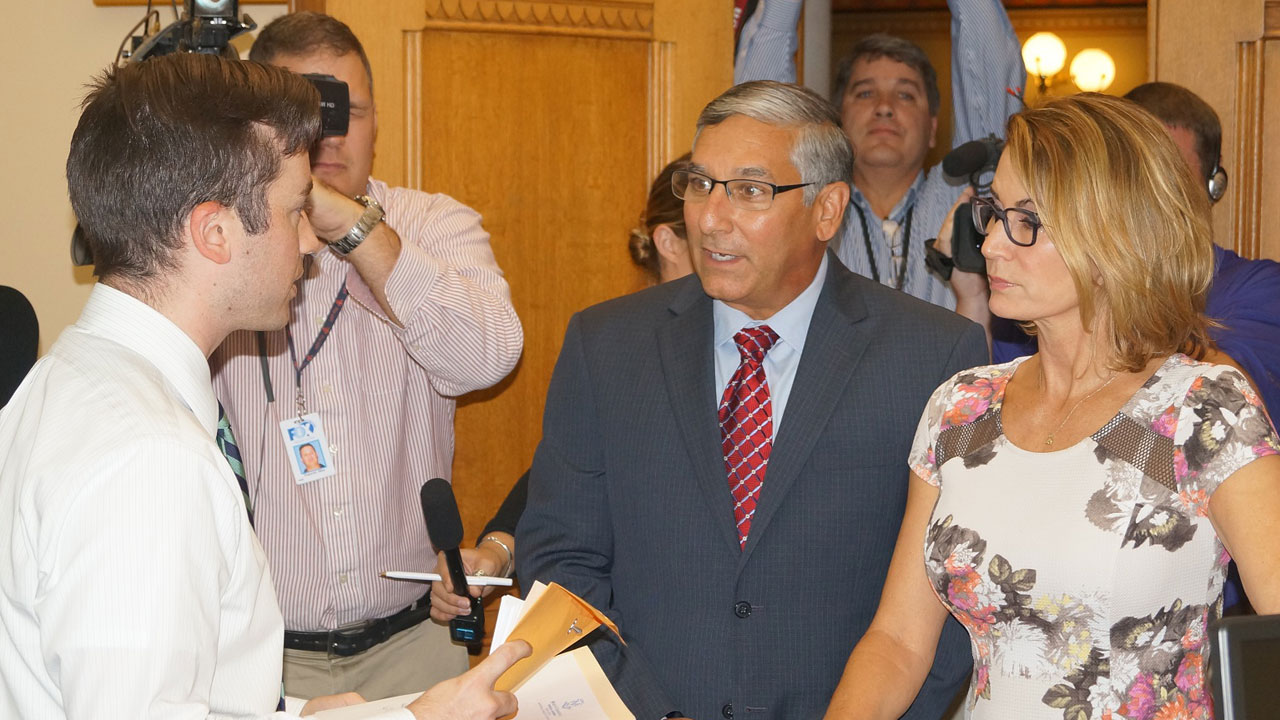 Sen. Fasano & Rep. Klarides deliver petitions to the Office of the Secretary of the State.

Following calls by hospitals, advocates for the disabled, and many others for legislative action to address Governor Malloy’s recent devastating budget cuts, Senate and House Republican legislators have all signed a petition seeking a special session of the General Assembly to rebuild the state budget and formally requested Democrat legislators do the same.

Today the lawmakers submitted all 79 petitions to the Office of the Secretary of the State signed by each and every Republican state lawmaker. If a majority of state lawmakers in each chamber sign this petition, it will trigger a special session. To gain a majority, at least 4 Democrats in the Senate and 12 Democrats in the House will need to join Republicans in signing the petition. Thus far, the governor and Democrat leaders have denied Republicans’ requests to hold a special session.

“We are urging all lawmakers who disagree with Governor Malloy’s cuts to stand up and take action,” said Senate Minority Leader Len Fasano (R-North Haven). “Our hospitals, our mental health programs, and our developmentally disabled services cannot wait until next year. The governor’s cuts will have a devastating impact on health care across the state. And we fear these cuts are only the beginning as the deficit is likely to continue growing.  We cannot continue to budget month to month.  We cannot continue to cut funding for hospitals and other vital services making the most vulnerable among us pay for failed budget policies. We need to get into a room together now and work collaboratively to rethink this budget to prevent a health care crisis. I know there are many Democrats who want to join us in protecting the most vulnerable. I know we all want to preserve health care quality and access. I hope all lawmakers will put politics aside and do the right thing.”

“It’s not enough to simply disagree with the governor’s cuts. If we want to see change, we need to act together. Democrats and Republicans have the power to override the governor, but only if we work collaboratively, the legislature cannot sit idly by while its policy priorities are ignored and the governor wreaks havoc on our health care system.  This is a long term problem that requires a long term solution and we cannot wait until the next session when three quarters of the fiscal year will be gone and our options diminished. By then, many hospital workers will have lost their jobs and the disabled and others lost services,” said House Republican Leader Themis Klarides (R-Derby).

The petition calls for a session, “To make adjustments to the state budget for the biennium beginning July 1, 2015, including adjustments to restore Medicaid funding and other state support for hospitals, health care and other services.”

The General Assembly can be called in to a special session by the governor or by majority party legislative leaders. However, if rank and file legislators demonstrate that a majority in both chambers deem it necessary to meet in special session, they can initiate a session themselves.

The governor’s $103 million in cuts include millions in cuts to mental health and substance abuse services and programs that help those with disabilities – all areas that were already slashed in the Democrats’ budget. It also includes $64 million in Medicaid cuts that directly affect hospitals and translate to a loss of $128 million in federal dollars, for a total loss of $192 million in funding for Connecticut’s hospitals.  The result is hospitals become net taxpayers to the state of approximately a half a billion dollars.