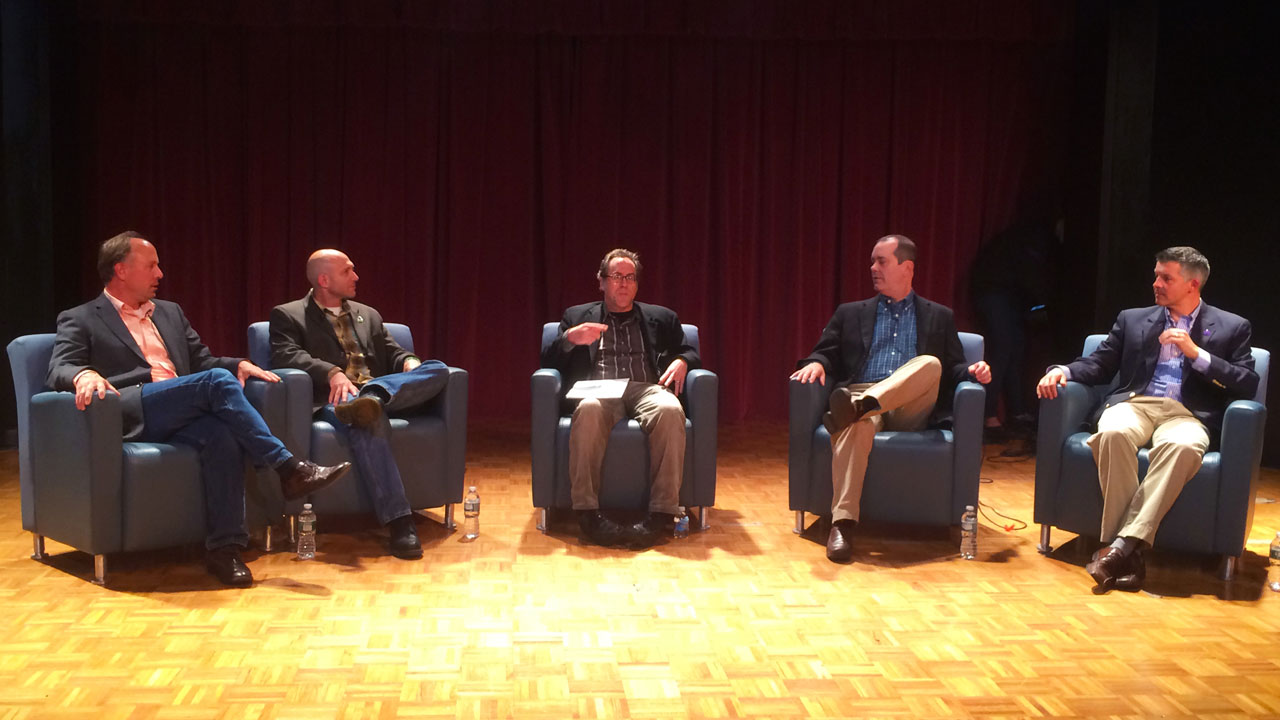 In an evening that was as inspiring as it was emotional, four Newtown fathers who lost children in the Sandy Hook Elementary School massacre took part in a moderated discussion at Quinnipiac University on Oct. 21.

“Four Fathers, Four Journeys,” which was sponsored by Quinnipiac’s Student Programming Board, drew a standing-room-only crowd of about 200 to the Clarice L. Buckman Theater on the Mount Carmel Campus.

“The ‘Four Fathers’ offered advice on how to move forward and how to turn an awful thing into something that can help others,” said Madeline Harding, a senior from Clifton Park, New York who serves as SPB’s Talks and Topics chair. “The Quinnipiac students are leaving the discussion inspired with a message of hope.”

Scott Wolfman, a Newtown resident and president of Wolfman Productions, served as the moderator. He said Barden, Hockley, Richman and Wheeler have become close friends and were making their first speaking engagement together.

“They’ve never done anything like this before,” Wolfman said. “They are feeling the worst kind of pain and suffering and somehow they are intent on helping others and making the world a better place.”

Wheeler lost his son, Ben, to the unspeakable tragedy at Sandy Hook Elementary School on Dec. 14, 2012 in which a gunman killed 20 first-graders and six adults.

“I have to get up in the morning and I have to look at myself in the mirror,” Wheeler said. “I have to feel like I’m still Ben’s father. I’m never not going to be Ben’s father, ever. I have to do what I can to make his legacy for him. You guys have a chance now in your lives to go out and make your legacy. Get your education. Go out into the workforce. Live your lives. Do something. Ben didn’t get that chance. None of these kids got the chance to make a legacy. It just was taken from them.”

Richman, whose daughter, Avielle, was murdered at Sandy Hook, said the Quinnipiac students “are the people we can point to help us build a legacy and to make change that we so desperately want to make in the world.”

Richman added that he decided to become a neuroscientist after his grandfather was diagnosed with Alzheimer’s disease.

“Be inspired, be passionate and follow those things that touch you,” he said.

Wheeler, Richman and Hockley have worked to keep their children’s memories alive through their foundations: Ben’s Lighthouse, Avielle Foundation and Dylan’s Wings of Change.

Hockley said Dylan was autistic and received tremendous support at Sandy Hook. The foundation in Dylan’s name is devoted to children with autism.

Barden has set up the website What Would Daniel Do? in remembrance of his son. Barden recalled spending extra time with his son on the morning of his death. They marveled at the flickering lights on the Christmas tree and the beauty of the sunrise while snuggling on the couch.

Currently, Quinnipiac University is the only scheduled appearance for “Four Fathers, Four Journeys.”

“The students responsible for bringing this to Quinnipiac knew the audience would leave with a message of strength, of overcoming adversity, and of leaving a legacy every day of their lives,” said Stefano Fasulo, associate director for the  Department of Campus Life. “It was simply powerful.”