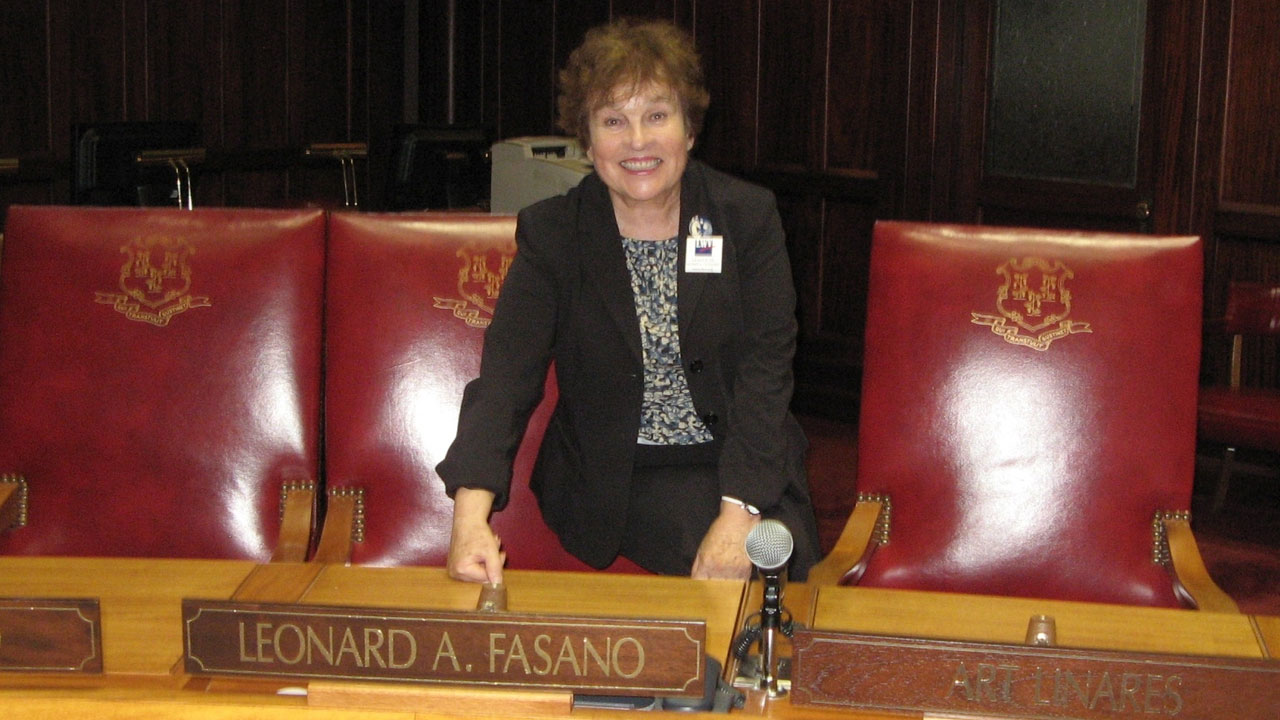 In just August, more than 1,000 visitors took a state capitol tour in Hartford given by the League of Women Voters, LWV. Visitors came from 58 Connecticut towns, 32 states, and 26 countries. On September 10, the board of the League of Women Voters of Connecticut took the tour also, among them membership co-chair of the LWV of Hamden-North Haven, Elona Vaisnys who also serves on the state board. “The League gets you to do what you always intended to and never did,” beams Vaisnys.

Over the last fiscal year, League capitol tours takers came from 153 Connecticut towns (of 169), 47 states (Alaska and Hawaii among them!), and 67 foreign countries. The Senate and House chambers are a special attraction, including to Vaisnys who could not resist sitting on the armrest of her state senator chair. There is a “Wishing Chair” in the Senate chamber that invites interaction, especially by the young who can’t wait to sit in the ornately carved chair (made from the famed Charter Oak Tree) used by the Lieutenant Governor who presides over the Senate. Presumably, every lieutenant governor wishes to be the governor, hence, “the Wishing Chair.”

The state capitol was built in 1878. It was topped by a gold leaf covered dome on which stood a huge, winged statue called the Genius of Connecticut. In 1938, a hurricane hit the eastern coast and damaged the 3.5 ton, 17 ft statue which was then taken down. An replica of the Genius of Connecticut now greets visitors to the capitol building as it waits for funding to become available, so that it can one day raise its wings again above the golden dome in our state’s capital.

LWV has been providing free tours five days a week since 1971. The Trip Advisor website lists the League tours in 5th place of 41 Hartford area attractions to visit. Tours are available to schools (superintendents receive information), organizations, and groups. Find out more at www.cga.ct.gov/capitoltours, 860/240-0222, or [email protected]

The League of Women Voters works to increase understanding of public policy issues and to influence public policy through education and advocacy. The League encourages informed participation in government at all levels but does not support or oppose political candidates. It is active in all 50 states. Men have been joining the League since 1974, and a man serves on the Connecticut state League board. To discuss joining the League, call Elona Vaisnys at 203/248-8035, write[email protected], or visit www.lwvct.org.