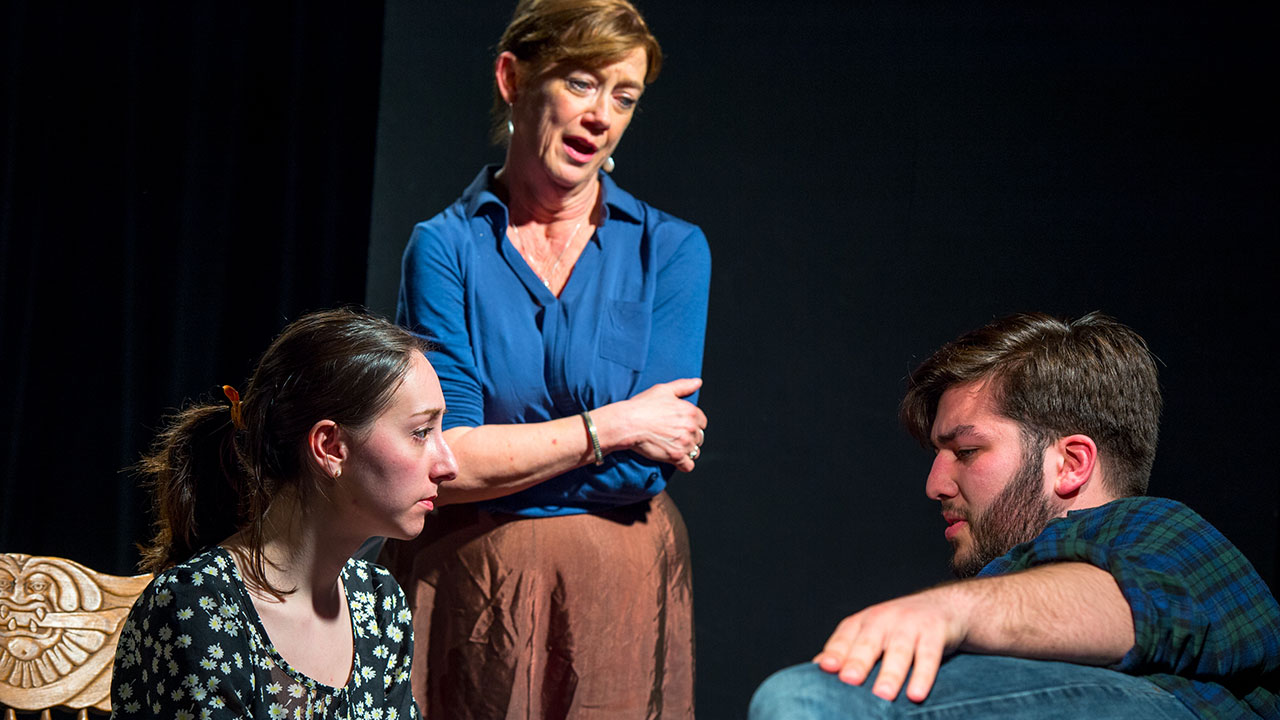 Crystal Brian, center, professor of theater at Quinnipiac University, rehearses a scene with Sara Detrik and Ryan Devaney, who starred in the April performance of “1918” at Quinnipiac.

The season opens with Carlo Goldoni’s zany farce, “The Servant of Two Masters,” adapted and translated by Jeffrey Hatcher and Paolo Emilio Landi. Pratfalls and wisecracks abound as the perpetually hungry servant, Truffaldino, tries to double his wages and his meals by working for two masters at the same time. Crystal Brian, professor of theater, and Drew Scott, adjunct professor of theater, will direct the performances, which will take place Oct. 15-17 at 7:30 p.m. and Oct. 18 at 2 p.m. in the Clarice L. Buckman Theater on the Mount Carmel Campus.

The mood turns more serious with the season’s second offering, the musical, “Spring Awakening,” with book and lyrics by Steven Sater and music by Duncan Sheik. Adapted from a 19th century German play of the same name, “Spring Awakening” uses a contemporary rock score to tell the story of a group of teenagers living in a repressive society and struggling with the turbulent and often agonizing transition from adolescence to adulthood. The show, which will be directed by James Noble, adjunct professor of music, will be performed Nov. 12-14 at 7:30 p.m. and Nov. 15 at 2 p.m. in the Clarice L. Buckman Theater on the Mount Carmel Campus.

For the final play of the season, Theater for Community will transport the audience to Ireland with “The Shadow of a Gunman” by Sean O’Casey. Set in 1920, the action takes place in a Dublin tenement where romantic, would-be poet Donal Davoren is mistaken for an IRA gunman on the run and experiences firsthand the terror and the terrible cost of Ireland’s battle for independence. Directed by Crystal Brian, professor of theater, “The Shadow of a Gunman” will be performed April 14-16 at 7:30 p.m. and April 17 at 2 p.m. in the Clarice L. Buckman Theater on the Mount Carmel Campus.

Tickets for each performance are $10 for students and seniors and $15 general admission. Reservations and advance ticket purchases can be made here.

The guiding principle of the Theater for Community program is the conviction that theater can be a tool to foster student engagement with the local, national and global community. Students are introduced to diverse social issues and topics outside of their everyday experiences and, as a result, are forced to explore the topic from a different perspective. Using original or adapted scripts, students stage plays that address such compelling issues as revenge, war, prejudice and justice.